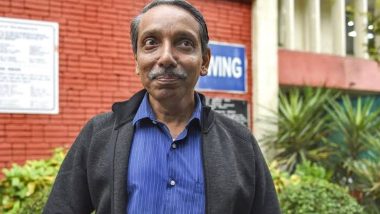 New Delhi, January 13: Jawaharlal Nehru University Vice Chancellor M Jagadesh Kumar on Monday stated that more than 50 percent of the students have paid their hostel dues and registered for the winter session. He also has appealed the remaining students to get registered for the current session, else they might loose one academic year.

Updating about the registration process, Kumar said, as quoted by news agency ANI, "The first day of winter semester has started and more than 50 percent of the students have paid their hostel dues and registered; classes have begun. Appeal to all students to register else it will lead to loss of one academic year." JNU Violence: After 'Sting Operation', Delhi Police Summons Suspects Akshat Awasthi, Rohit Shah; They Refuse to Join Probe.

Jawaharlal Nehru University Vice Chancellor M. Jagadesh Kumar: The first day of winter semester has started&more than 50% of the students have paid their hostel dues&registered; classes have begun. Appeal to all students to register else it will lead to loss of one academic year. pic.twitter.com/6zRA8JiNhx

Citing the impact of recent violence in January's first week, the administration has extended the registration date for January 5 to January 15. Releasing the advisory, JNU had said, "The above call for 'non-cooperation' not only goes against the efforts of the administration for restoration of normalcy in the campus and resumption of academic activities but also reflects the intention of JNUTA to disrupt normal functioning of the university."

Also, the administration had asked the JNUTA to resume their classes and other academic activities in the interests of the student community. It had said, "The JNUTA GBM resolution on the non- cooperation action plan implies that we refuse to comply with the two circulars issued on January 10, 2020 which asked teachers to be present in their offices for registration, to start classes and other relevant academic activities from January 13, 2020 and to upload time-tables for the same."

Meanwhile, JNUTA had asked the Human Resource Development Ministry on how can they resume teaching when students have not retruned to campus due to the the violence of January 5. Delhi police, in the meantime, questioned JNUSU president Aishe Ghosh and three others in connection with 5 January JNU violence case.

(The above story first appeared on LatestLY on Jan 13, 2020 05:05 PM IST. For more news and updates on politics, world, sports, entertainment and lifestyle, log on to our website latestly.com).