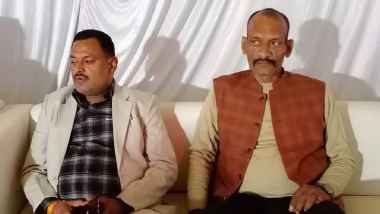 Mumbai, July 11: An accused in the Kanpur shootout case, along with his driver, was arrested by the Mumbai unit of Maharashtra Anti Terrorism Squad (ATS) on Saturday. The duo were nabbed in Thane, the satellite town located close to Mumbai. They were arrested after the ATS unit received a tip-off. Vikas Dubey’s Encounter Raises More Questions Than It Answers.

The detainees have been identified as Arvind alias Guddan Ramvilas Trivedi - a key accused in the killing of cops in Kanpur last week - and his driver Sonu Tiwari. The ATS, by the time preliminary reports had emerged, did not specify when they would be handed over to the UP Police.

"On 11 July, ATS Juhu Unit, Mumbai received a tip-off that one accused in Kanpur encounter case has been in Thane in search of a hide-out. ATS Juhu Unit laid a trap at Kolshet Road, Thane and nabbed wanted accused Arvind and his driver Sonu Tiwari," said a statement issued by the Maharashtra ATS.

The arrest of Arvind and Sonu comes a day after Vikas Dubey, the main accused in the killing of policemen in Kanpur on July 3, was killed in a police encounter on outskirts of Kanpur.

The UP ATS team which was bringing him from Madhya Pradesh claimed that Vikas attempted to snatch a gun and escape after the security convoy faced an accident. In a bid to prevent him from escaping, the accused was shot dead, the police claimed. His autopsy report is awaited.

(The above story first appeared on LatestLY on Jul 11, 2020 03:48 PM IST. For more news and updates on politics, world, sports, entertainment and lifestyle, log on to our website latestly.com).