Karnataka: Over 50 Muslim Neighbours Shoulder Bier of Woman, Conduct Her Last Rites As per Hindu Customs in Mysuru

"This incident proves again that Karnataka is 'Sarva Janangada Shantiya Thota' (garden where all communities live in harmony),” Pasha said. 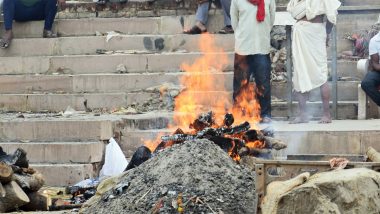 Mysuru, April 25: Amid the ongoing communal tensions across the country, a heartwarming incident of communal harmony was witnessed in Karnataka's Mysuru. On Friday, Muslim neighbours carried out the funeral rites of a 60-year-old woman as per Hindu customs. Sources said that the deceased is survived by her husband and a son.

According to a report in The New Indian Express, the deceased identified as Jayakka (60) was a resident of Ghousianagar for the last four decades. The area is dominated by the Muslim population. On Friday, Jayakka was declared dead by doctors after she suffered a massive heart attack. Ramzan 2022 Time Table: Sehri and Iftar Timings for 23rd Roza of Ramadan on April 25 in Mumbai, Delhi, and Lucknow.

Sources said that the woman's husband, son, and daughter-in-law were with her when she passed away. While the sudden passing away of Jayakka left the family helpless, their neighbours quickly swung into action and came forward in order to make sure she gets a decent burial. Over 50 to 60 neighbours decided to shoulder the woman's bier and also assist the family to conduct the final rites as per Hindu customs.

Social activist Tanveer Pasha who led the march said, "Jayakka lived most of her life in this area. Her family was the only Hindu family but we all shared a great bond. We celebrated the festivals, and family occasions together. When we heard about her sudden demise we were shocked and the best we could do at this time was to lend our shoulder to carry bier and give her a dignified farewell and assist the family in their darkest hours."

Meanwhile, over 50 Muslims who are observing fast during Ramzan took part in the final journey of the woman and helped the family to bury the body as per Hindu tradition. Mumbai-Based Activist Jatin Desai Urges Pakistan PM Shehbaz Sharif To Release Indians Stuck in Pak Jails.

"Several organisations and individuals with their words and actions spew venom among the Hindu and Muslims to spread hatred among these communities or to gain their political mileage and to increase their vote bank. But this incident proves again that Karnataka is 'Sarva Janangada Shantiya Thota' (garden where all communities live in harmony),” Pasha said.

(The above story first appeared on LatestLY on Apr 25, 2022 05:00 PM IST. For more news and updates on politics, world, sports, entertainment and lifestyle, log on to our website latestly.com).