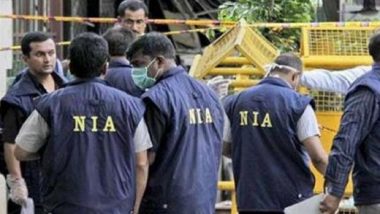 Kochi, July 13: The National Investigation Agency (NIA), tasked to probe the Kerala gold smuggling case, told a court that smuggled gold was not for jewellery for used for terror activities. This came after the NIA booked four people, including prime accused Swapna Suresh, under the Unlawful Activities (Prevention) Act. Other three accused are Sandeep Nair, PS Sarith and Fazil Fareed. Nair is also in NIA's custody. What is Kerala's Gold Smuggling Case And Why is CM Pinarayi Vijayan Under Attack?

"The accused forged seal and emblem of the UAE Embassy to commit the crime. Smuggled gold was used not for jewellery but terror activities," the central agency told a Special NIA court in Kochi on Monday. The NIA has booked all the four accused under the UAPA for allegedly facilitating the smuggling of gold through diplomatic baggage to Thiruvananthapuram from Dubai on July 5.

Swapna, a former employee of the UAE consulate in Thiruvananthapuram, has been in touch with the high and mighty in the state and was close to Chief Minister Pinarayi Vijayan's now-ousted secretary M Sivasankar. Sarith and Swapna were former colleagues at the UAE Consulate office and later, Swapna joined a high-profile job attached to the IT department, where Sivasankar was the Secretary.

The case has heated up the political canvas in Kerala and senior Congress leaders urged Prime Minister Narendra Modi to order an NIA-CBI-RAW probe into the gold smuggling case. The party has already demanded that Vijayan should resign.

(The above story first appeared on LatestLY on Jul 13, 2020 04:57 PM IST. For more news and updates on politics, world, sports, entertainment and lifestyle, log on to our website latestly.com).