What is Kerala's Gold Smuggling Case And Why is CM Pinarayi Vijayan Under Attack?

The gold smuggling case has turned into a political slugfest for Kerala Chief Minister Piranayi Vijayan after it emerged that the prime accused, Swapna Suresh, had a close relationship with senior IAS officer M Sivasankar. 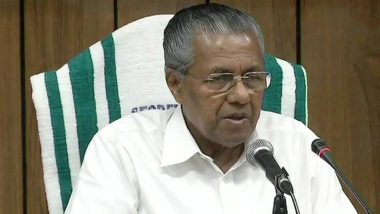 Thiruvananthapuram, July 7: The gold smuggling case has turned into a political slugfest for Kerala Chief Minister Pinarayi Vijayan after it emerged that the prime accused, Swapna Suresh, had a close relationship with senior IAS officer M Sivasankar. Sivasankar was holding the post of Principal Secretary to Pinarayi Vijayan until he was removed on Tuesday. While Vijayan has denied the involvement of his office in gold smuggling, Opposition leader and senior Congressman Ramesh Chennithala demanded a CBI investigation. Kerala Gold Smuggling Case: UAE Embassy Extends Full Cooperation With Indian Customs Authorities, Urges Stringent Legal Action Against Culprits.

What is Kerala's Gold Smuggling Case?

On July 5, the Air Customs seized 30 kg of gold that arrived on a cargo flight and was kept in a warehouse at the Thiruvananthapuram airport for release. The gold worth Rs 15 lakh, which landed in diplomatic baggage, is understood to have been marked to the UAE Consulate. Following the initial probe, the Air Customs arrested Sarith who was working as PRO at the UAE Consulate. According to reports, Sarith along with Swapna Suresh were allegedly smuggling gold from Dubai. Kerala Gold Smuggling Case: Congress Leader Ramesh Chennithala Writes Letter to PM Narendra Modi, Seeks CBI Probe.

Why is Pinarayi Vijayan Under Attack?

What has stunned many is the way Swapna Suresh made inroads into the seat of power and her links with Sivasankar, who had been Principal Secretary to Vijayan. Prior to joining the UAE Consulate, Swapna was working with Air India's ground handling agency. Various reports have come out that Swapna and Sivasankar were good friends and he was a regular visitor at her house.

It was through these contacts that she got a plush job in the state's IT department where Sivasankar was serving as Secretary until today. Moreover, Vijayan apart from holding the Home portfolio also heads the IT department. Swapna is currently absconding.

Demanding CBI probe into the gold smuggling case, Congress leader Ramesh Chennithala said: "The Chief Minister's Principal Secretary, A.M. Sivasankaran, is turning into a major point of all the deals taking place in the state, and the gold smuggling case is of much higher proportion and a CBI investigation is necessary for this case." He added, "The woman involved in the controversy, Swapna Suresh, is working in the marketing and liaison section of the Kerala IT department, which is directly under the Chief Minister. Even after intelligence reports coming out against her, how this woman is able to get such a job."

Vijayan has denied any involvement in the case and rubbished remarks on the involvement of his office. "BJP state president has come out with baseless allegations against my office. The Chief Minister's office does not promote any illegal activities," the Chief Minister asserted. He also feigned ignorance as to how Swapna Suresh was posted in the government IT department. "I don't know how she got the job. I will check this and inform," he said.

(The above story first appeared on LatestLY on Jul 07, 2020 05:11 PM IST. For more news and updates on politics, world, sports, entertainment and lifestyle, log on to our website latestly.com).