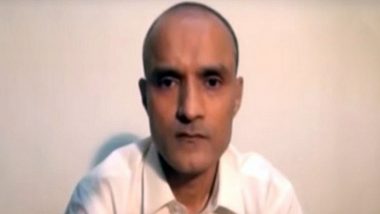 The development came after India sought unrestricted consular access to Kulbhushan Jadhav before July 20 which is the last date to file a review petition. Earlier this month, Pakistan had claimed that Jadhav refused to file a review petition and has decided to go ahead with his pending mercy plea. Jadhav was sentenced to death by a Pakistani military court on charges of espionage and terrorism in April 2017.

Pakistan had alleged that Jadhav, a retired Indian Navy officer, was a senior Indian intelligence officer who entered the country illegally to carry out acts of sabotage at the time of his arrest. Following Jadhav's arrest and sentencing, India approached the International Court of Justice (ICJ) against the death penalty and also the denial of consular access to him. 'Kulbhushan Jadhav Under Extreme Pressure to Parrot False Narrative of Pakistan', Says MEA After Indian Envoy in Islamabad Meets Him.

In July 2019, the ICJ ordered Pakistan not to execute Jadhav and asked it to reconsider the death sentence awarded to him by a military court. It also ordered Pakistan to grant India consular access to Jadhav. On September 2 last year, Pakistan allowed Indian Charge d'Affaires Gaurav Ahluwalia to meet Jadhav at a Pakistani sub-jail.

In May this year, Pakistan had said that it has "fully complied" with the ICJ's judgement in Jadhav case, days after India's lead counsel asserted that New Delhi had hoped it might be able to persuade Islamabad through "back channel" to release the Indian death-row convict.

(The above story first appeared on LatestLY on Jul 16, 2020 04:09 PM IST. For more news and updates on politics, world, sports, entertainment and lifestyle, log on to our website latestly.com).