'Kulbhushan Jadhav Under Extreme Pressure to Parrot False Narrative of Pakistan', Says MEA After Indian Envoy in Islamabad Meets Him 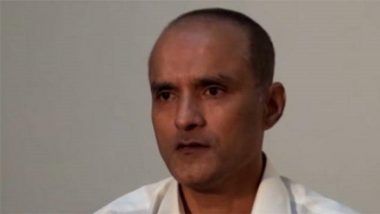 New Delhi, September 2: The Ministry of External Affairs (MEA) on Monday said that former Indian Navy officer Kulbhushan Jadav is appeared to be under extreme pressure to parrot a false narrative to bolster Pakistan’s claims. Kulbhushan Jadhav, who has been jailed in Pakistan on espionage charges, was granted consular access by Islamabad. Gaurav Ahluwalia, India's Deputy High Commissioner to Pakistan, met Jadhav today.

After the meeting, the MEA said that it would decide a further course of action once it receives a detailed report. The ministry in a statement stated, “We"ll decide a further course of action after receiving a detailed report from our Charge d’ Affaires and determining the extent of conformity to the International Court of Justice (ICJ) directives.” S Jaishankar, External Affairs Minister, also spoke to the mother of the former Indian Naval officer and briefed her of Monday’s developments. ICJ Verdict in Kulbhushan Jadhav Case: Highlights of Judgment Delivered By International Court of Justice.

MEA: We"ll decide a further course of action after receiving a detailed report from our Charge d’ Affaires and determining the extent of conformity to the ICJ directives. External Affairs Minister has spoken to the mother of #KulbhushanJadhav & briefed her of today’s developments https://t.co/N3UlP5Hu02

Pakistan on Sunday agreed to provide consular access to Jadhav in accordance with Vienna Convention on Consular relations. Earlier, on August 8, the Imran Khan government had turned down India’s request for “unimpeded consular access” to the former Indian naval officer.

Kulbhushan Jadhav is a retired Indian Navy officer sentenced to death by a Pakistani military court in 2017 on the charges of "espionage and terrorism". In July this year, the ICJ accepted India’s request for consular access to Jadhav. The United Nations court also Pakistan to review the conviction and sentencing of Jadhav.

(The above story first appeared on LatestLY on Sep 02, 2019 07:37 PM IST. For more news and updates on politics, world, sports, entertainment and lifestyle, log on to our website latestly.com).