Two calves were killed by a leopard in Mangampet village of Sangareddy district in Telangana on Wednesday. The forest officials are monitoring the movement of the wild animal. 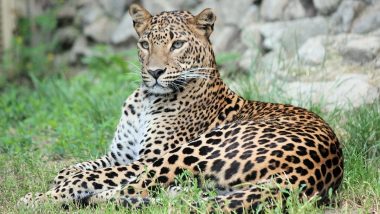 Hyderabad, October 8: A case of leopard attack has been reported from Sangareddy district of Telangana on Wednesday. The big cat entered a shed located near the forest area and attacked the cattle in it. According to report, the leopard killed two calves and took away the carcass of one with it. The incident has been reported from Mangampet village in Jinnaram mandal of the district. The farmers in the area have demanded setting up a cage to trap the wild animal. Leopard Attack in Mumbai: 20-Year-Old Man Admitted to Cooper Hospital After Being Injured in Attack by the Big Cat.

Report informs that the incident came to light when the local farmers realised that two of the calves were missing from the shed. Following which they started to look out for the missing cattle and spotted a leopard in the area. The farmers have asked the forest officials to set up trap cages so that the wild cat can be caught. The officials have assured the farmers that they will be given compensation of their loss, reported the Times of India. Leopard Attack: Kolhapur Family Escapes Unhurt After Big Cat Enters House While Chasing Pet Dog.

District forest official, Sangareddy, V Venkateshwar Rao said, “We were informed about the incident by local farmers who noticed in the morning that one of the calves was missing. When the farmers went in search for the missing calf sighted the leopard,” as reported by TOI. The officials are also reportedly monitoring the movement of the wild animals.

(The above story first appeared on LatestLY on Oct 08, 2021 05:49 PM IST. For more news and updates on politics, world, sports, entertainment and lifestyle, log on to our website latestly.com).