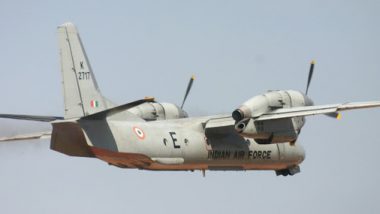 Itanagar, September 18: In a bid to boost military infrastructure along the China border, the Indian Air Force‘s (IAF) transport aircraft AN-32 landed at Vijaynagar advanced landing ground (ALG) in Arunachal Pradesh on Wednesday. It is one of the eight ALGs activated in the state for the mobilisation of military equipment and troops immediately. Eastern Air Commander Air Marshal RD Mathur and Eastern Army Commander Lieutenant General Anil Chauhan were in the aircraft when it landed at the ALG. China Objects to Indian Army's 'Transgression' in Arunachal Pradesh, India Rejects Protest.

Video of The Landing:

#WATCH: Indian Air Force's AN-32 transport aircraft landed at Vijaynagar advanced landing ground (ALG) in Arunachal Pradesh near the China border. This is one of the eight ALGs activated in the state to boost military infrastructure along the China border. pic.twitter.com/4WGH4LenH7

The development came days after a day-long standoff which took place between Indian and Chinese troops at Eastern Ladakh. As per reports, the face-off between both the armies took place on the 134-km-long Pangong Tso which extends from Tibet to Ladakh. The confrontation started after Chinese troops stopped Indian soldiers during patrolling. China controls Two-third of the Pangong lake. Chinese Army Transgressed Into Uttarakhand Thrice in August: Report.

In October, the Indian army is also expected to hold its “Him Vijay” war game exercise in which around 15,000 soldiers will participate. Meanwhile, Prime Minister Narendra Modi and Chinese President Xi Jinping likely to hold informal talk next month in India. Both the leaders are expected to discuss border issues between India and China. Chinese foreign ministry spokesperson Hua Chunying said on Tuesday that both the leaders Kashmir might not be a major topic of discussion during the meeting.

(The above story first appeared on LatestLY on Sep 18, 2019 01:36 PM IST. For more news and updates on politics, world, sports, entertainment and lifestyle, log on to our website latestly.com).