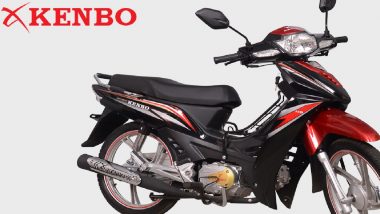 Aizwal, September 9: The Mizoram government has banned the use of China-made Kenbo motorcycles as they are being used in the border state to bring smuggled or illegal substances, including drugs, from neighbouring Myanmar, an official said on Wednesday. "Though the two-wheelers are made outside the country and are unregistered in Mizoram, a huge number of such bikes are brought into the state. These are randomly used in Champhai, Hnahthial, Lawngtlai, Siaha and Serchhip districts along the Myanmar border," the official said. PUBG Banned in India: Gaming App Among 118 Chinese Mobile Apps Banned by Modi Government; Check Complete List.

Although Mizoram's mountainous and unfenced international border with Bangladesh (318 km) and Myanmar (404 km) and inter-state borders with Tripura, Assam and Manipur are sealed in view of the Covid-19 outbreak, smuggling of various drugs, including methamphetamine tablets, foreign-made cigarettes, arms and ammunition and other contraband is still going on. While the Border Security Force guards the Bangladesh border, the border with Myanmar is looked after by the Assam Rifles and it has seized smuggled drugs and other contraband, including heroin, valued around Rs 29 crore since July 1. Mizoram Records Highest Single-day Spike of 69 COVID-19 Cases.

Methamphetamine tablets (also called Yaba tablet or party tablet) contain a mix of methamphetamine and caffeine and are misused as high-dosage drugs in India, Bangladesh and other neighbouring countries. According to the BSF, Assam Rifles and intelligence officials, Yaba tablets and other drugs are smuggled into the northeastern states from neighbouring Myanmar and then smuggled to Bangladesh, and Sri Lanka as well as various Indian states.

(The above story first appeared on LatestLY on Sep 09, 2020 11:14 PM IST. For more news and updates on politics, world, sports, entertainment and lifestyle, log on to our website latestly.com).