A bus conductor of the Maharashtra State Road Transport Corporation (MSRTC) has died by suicide in Jalgaon. 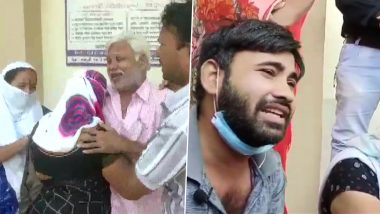 Jalgaon, November 9: A bus conductor of the Maharashtra State Road Transport Corporation (MSRTC) has died by suicide in Jalgaon. According to news agency ANI, the bus conductor allegedly committed suicide over erratic disbursement of salary. "For the last three months, he didn't get his salary properly. He has named Uddhav Thackery government responsible for his death," the deceased's brother said on Monday. MSRTC to Pay 50% Salary For May 2020 to 1 Lakh Employees Due to Financial Stress Amid Lockdown, Remaining Salaries to be Paid in Coming Months.

Anil Choudhry, father of the deceased MSRTC bus conductor, also said that his son was not getting salary regularly. "My son used to work for the MSRTC and was posted at the Jalgaon depot. He was dealing with loans & used to get erratic and low salary and committed suicide because of it," Choudhry told ANI. Meanwhile, Maharashtra State Transport Minister Anil Praba said pending dues of one month will be released today. Mumbai: 105 MSRTC Bus Staff Contract COVID-19 After Working for BEST Buses.

"State transport employees with pending salaries to be paid one month's salary today. Before Diwali, they will get two month's salary," Anil Parab announced. "They need not be disheartened and take extreme steps like suicide. Economic condition is bad now, but we will find a way," he added.

(The above story first appeared on LatestLY on Nov 09, 2020 04:09 PM IST. For more news and updates on politics, world, sports, entertainment and lifestyle, log on to our website latestly.com).