The Mumbai Police tracked down a woman who texted "suicide" to her uncle in West Bengal over a property dispute. 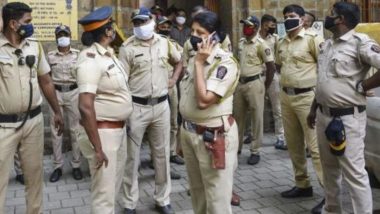 Mumbai, October 24: The Mumbai Police tracked down a woman who texted "suicide" to her uncle in West Bengal over a property dispute. Cops immediately swung into action after the woman's uncle tagged the city police on Twitter and informed that she sent a message saying she was going to end her life. Despite having little information about the woman, the police managed to reach to her and provided counselling. Mumbai Woman Stabs Daughter With Pencil, Bites Her For Failing to Answer During Online Class.

The woman was depressed because her mother and maternal uncle were planning to sell their flat in Kolkata against her wishes, TOI reported. On October 23, she sent a message to her uncle on WhatsApp in Bengali. She wrote: "I am gifting you my death. You all enjoy the pujo. I am not leaving any suicide note... You can then tell your lawyer that Sonai is dead so you can sell the house and take all money and enjoy…happy betrayal and durga pujo (sic)." Mumbai Police Posts a Mind-Boggling Puzzle and Wants You to 'Crack That Code' With Important Information on Safe Practices to Prevent Spread of COVID-19.

Around 10.35 pm on Thursday, her uncle approached the Mumbai Police on Twitter, tagging the Mumbai Police Commissioner. He tweeted: "My niece send a WhatsApp message to my wife on today evening to commit suicide. We are in West Bengal. We don’t know her address. please look into the matter immediately." He also shared a photograph of his niece and the building she lived in.

Under the supervision of DCP (cybercrime) Akbar Pathan, a team was formed which included senior Inspector SS Sharmila, Assistant Inspector Ravikiran Nale, constables Pravin Survase, Chalke and Shantaram Wable. They tracked her location between Ghatkopar and Kurla. First, they went to Ghatkopar but did not find her building. Around 2:30 am on Friday, they identified the building in Kurla and finally knocked on her door.

"She had switched off her phone after sending the message to her aunt. We were only given with two of her phone numbers, that were switched off," senior Inspector was quoted as saying. Police counselled the woman and her uncle also assured that they won't sell the flat.

(The above story first appeared on LatestLY on Oct 24, 2020 03:06 PM IST. For more news and updates on politics, world, sports, entertainment and lifestyle, log on to our website latestly.com).