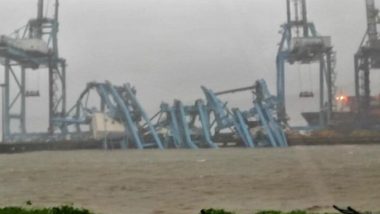 Mumbai, August 5: The maximum city witnessed it most devastating Monsoon day this year as the incessent rainfall in all parts of the city and neighbouring suburbs were combined with gusty winds. The wind speed was measured to be as high as 107 kmph, as per reports. At the Jawaharlal Nehru Port Trust (JNPT), four gantry cranes collapsed due to the rough weather.

See Pics and Videos of Cranes Collapsing at JNPT

A statement issued by the Chief Minister's Office said Thackeray held a meeting with the BMC officials and asked them to remain on high alert as the India Meteorological Department has predicted heavy rains to continue in the city tomorrow as well. The CM also took stock of the situation in neighbouring Thane, Palghar and Konkan.

"CM Uddhav Thackeray has asked BMC to stay on high alert as heavy rains continue in Mumbai for the 2nd consecutive day. Since IMD predicts heavy rains will continue till tomorrow, CM has appealed to citizens to stay home & venture out only if essential," the CMO said.

"Chief Minister Uddhav Thackeray also reviewed the situation with district collectors of Ratnagiri, Sindhudurg, Palghar, Kolhapur, Thane and Raigad districts as they have been experiencing heavy rainfall," it further added.

(The above story first appeared on LatestLY on Aug 05, 2020 08:16 PM IST. For more news and updates on politics, world, sports, entertainment and lifestyle, log on to our website latestly.com).