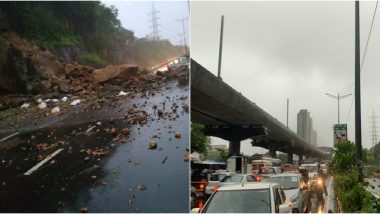 Incessant rains since late Monday left Mumbai semi-paralysed as the road traffic and suburban trains were affected due to waterlogged tracks.

Services on sections of suburban sector were halted or crawling on the Western Railway, Central Railway at various locations, while the Harbour Line was paralysed from Kurla to Chhatrapati Shivaji Maharaj Terminus. Mumbai Rains: Local Train Services Between Wadala And Parel Suspended, Western Railways Stops Trains Between Bandra and Churchgate.

The two highways, main roads and arterial roads in many parts of the city were flooded halting road traffic, stranding many vehicles.

More than 230 mm of rainfall recorded in Mumbai city in the last 10 hours, according to Brihanmumbai Municipal Corporation pic.twitter.com/JVhEWcICvK

There was a huge landslide on a hillock with tonnes of debris falling on the Western Express Highway at Malad, blocking south-bound road traffic with commuters stuck.

The BrihanMumbai Municipal Corporation has deployed water pumps to flush out the excess flood water and clear the roads.

The IMD has forecast that heavy rains in the Mumbai metropolitan region will continue for the next 24 hours with a high alert issued on Monday.

Similarly, heavy rainfall was recorded from neighbouring districts of Thane, Palghar and Raigad.

BMC has asked people to stay indoors and avoid stepping out in view of prediction of heavy rains.

"As per the IMD forecast, extremely heavy rainfall is expected in the city and suburbs. Mumbaikars are requested not to venture out unless extremely necessary and stay away from the shore and waterlogged areas," BMC said.

(The above story first appeared on LatestLY on Aug 04, 2020 09:36 AM IST. For more news and updates on politics, world, sports, entertainment and lifestyle, log on to our website latestly.com).