The caller told the complainant that he will help her update the KYC details, and she followed his instructions, an official said. 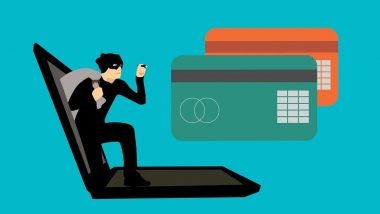 Mumbai, April 14: A 66-year-old journalist was allegedly cheated of Rs 49,000 by a cyber fraudster on the pretext of updating her KYC details in the western suburb of Khar here, police said on Thursday.

The fraud came to light when the woman journalist approached to the police to lodge a complaint on Tuesday, an official said. Ramzan 2022 Time Table: Sehri and Iftar Timings for 13th Roza of Ramadan on April 15 in Lucknow, Mumbai, and Delhi.

According to the complainant, she received a call from a man posing as an executive of a mobile phone service provider company, who informed her that her SIM card had been blocked and she needed to update it, he said.

The caller told the complainant that he will help her update the KYC details, and she followed his instructions, he said.

The woman then downloaded the 'quick support' application and transferred Rs 10 from her bank account initially on the instructions of the fraudster, the official said.

As the transfer was complete, the victim found that Rs 49,000 were withdrawn from her bank account, in two transactions of Rs 24,000 and a transaction of Rs 1,002, he said.

An FIR under section 420 (cheating) of the IPC and relevant provisions of the Information Technology (IT) Act has been registered in this regard, he said.

A similar crime was reported in Thane's Kopari area two months ago, when a caller posing as a bank executive had cheated a senior citizen for Rs 5.4 lakh on the pretext of updating KYC, the official said, adding that further probe is underway in the case.