An officer said that the person also sent a link to the woman and sought her UPI details which the woman immediately shared. 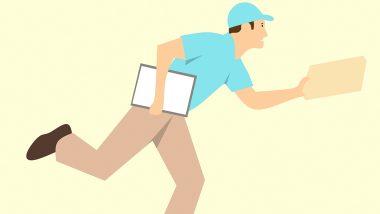 Mumbai, April 13: In a shocking incident, an elderly woman from Juhu fell prey to online fraud after she was duped to the tune of Rs 4.70 lakh. Police officials said that the woman was duped after she tried to find a courier service online.

According to a report in the Indian Express, the elderly woman approached the police and filed a first information report (FIR) on April 11. DGCA Restrains 90 SpiceJet Pilots from Flying Boeing 737 Max Till They Are Re-Trained Properly.

In her complaint, the 80-year-old homemaker from Juhu said that she wanted to send a saree by courier. On April 6, she searched Google for the contact number of a courier service provider for the same. However, she wasn't aware that fraudsters keep sharing fake customer care numbers online in order to cheat users.

The woman also said that when she contacted one such number, she was asked to pay Rs 10 as a registration fee. The unidentified person told her that post-registration a man would visit her to pick up the parcel. An officer said that the person also sent a link to the woman and sought her UPI details which the woman immediately shared.

However, the fraud only came to light a few days later when the woman visited the bank on April 11. When the bank officials informed her that Rs 4.70 lakh had been transferred out of her bank account in multiple transactions, the woman realised she was cheated. Post this, she approached the police and lodged a complaint.

(The above story first appeared on LatestLY on Apr 13, 2022 04:40 PM IST. For more news and updates on politics, world, sports, entertainment and lifestyle, log on to our website latestly.com).