Nepal to Handover 173,072 Kg of Red Sandalwood to India Confiscated While Being Supplied to China 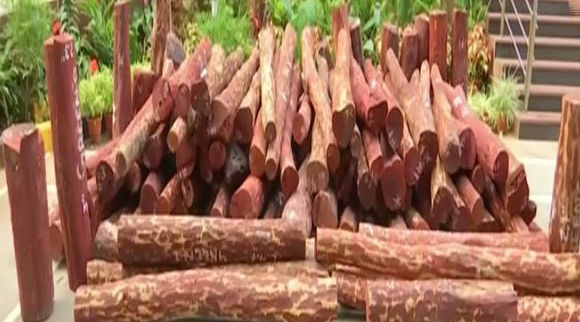 Kathmandu, January 17: Nepal will allow India to take home 173,072 kgs of red sandalwood that it had confiscated during the last 10 years while it was being smuggled to China from India through the Nepalese territory, according to a media report.

Both Nepal and India are parties to the Convention on International Trade in Endangered Species of Wild Fauna and Flora (CITES), a multinational treaty which has stipulated a provision of returning confiscated contraband to the country of origin. The Nepal government said that India can take home 173,072 kilograms of red sandalwood within 90 days, the Himalayan Times reported on Thursday. Nepal to Make Yoga Education Compulsory for Schoolchildren.

"The red sandalwood would be handed over to the concerned Indian authority through the Ministry of Foreign Affairs as per Article VII of the International Trade in Endangered Species of Wild Fauna and Flora Control Act-2016," Minister of Communications and Information Gokul Prasad Baskota said during a press conference here.

He also said that the transportation cost for returning the precious wood will be borne by India. Baskota said that Nepal's Ministry of Forests and Environment was having a hard time in managing the stash of red sandalwood seized from smugglers. The value of the seized sandalwood was not provided.

"At least four to five armed police personnel have been deployed to guard the red sandalwood on the premises of the Department of Forest in Babar Mahal," he said.