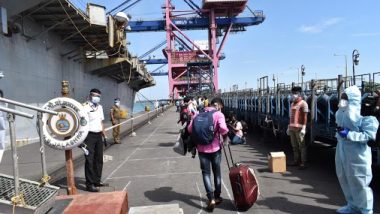 New Delhi, July 8: Operation Samudra Setu, which was launched on May 5, 2020, to bring back stranded Indians from overseas, has finally concluded. The operation by the Indian Navy, which was launched as part of the national effort to repatriate Indian citizens from different countries during the COVID-19 pandemic culminated today after successfully bringing 3,992 Indian citizens back to their homeland by sea.

Details of the evacuation are as follows: -

The 3,992 Indian citizens, who were evacuated during Operation Samudra Setu, were disembarked at various ports as indicated in the table above and entrusted to the care of respective state authorities. It was the greatest challenge for the Indian Navy was to avoid any incident of outbreak of infection onboard the ships during the evacuation operation.

The ships used for the operation were specially provisioned and the Sick Bay or the clinic onboard was especially equipped with COVID-19 related equipment and facilities. Women Officers and military nursing staff were also embarked for the women passengers. Basic amenities and medical facilities were provided to all evacuees during sea passage on these ships.

(The above story first appeared on LatestLY on Jul 08, 2020 08:05 PM IST. For more news and updates on politics, world, sports, entertainment and lifestyle, log on to our website latestly.com).