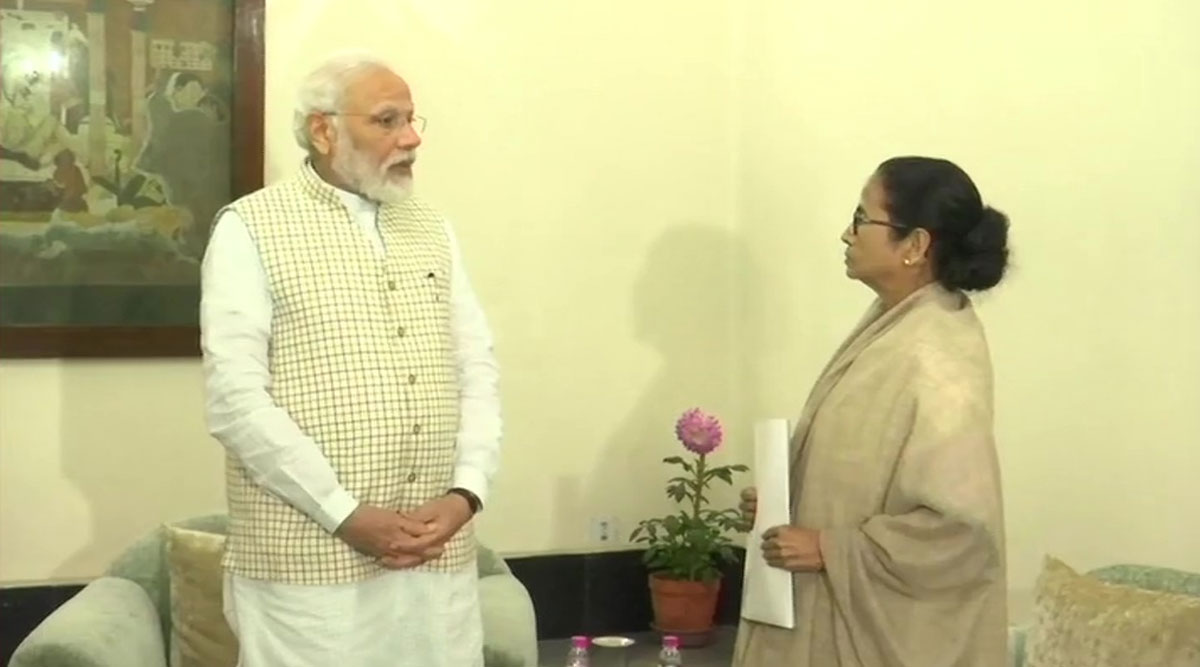 Kolkata, January 11: Prime Minister Narendra Modi on Saturday met West Bengal Chief Minister Mamata Banerjee after arriving Kolkata on a two-day visit. His visit comes amid protest against the Citizenship Amendment Act across the West Bengal capital. Protests are taking place in Kolkata from the morning, especially in the route from where his convoy went. PM Narendra Modi's Extensive Budget 2020 Consultations Reserved Only for Crony Capitalist Friends: Rahul Gandhi.

During the meeting between PM Modi and Banerjee at Raj Bhavan, the duo also talked about CAA. "While speaking to Prime Minister, I told him that we are against CAA, NPR and NRC. We want that CAA and NRC should be withdrawn," Mamata Banerjee was quoted by news agency ANI.

West Bengal CM Mamata Banerjee: While speaking to Prime Minister, I told him that we are against CAA, NPR and NRC. We want that CAA and NRC should be withdrawn. https://t.co/4ALUK2yPh3 pic.twitter.com/4sXduEn0lJ

PM Modi is on a two-day visit to Kolkata He will take part in 150th-anniversary celebrations of the Kolkata Port Trust. The premier was received by West Bengal Governor Jagdeep Dhankhar, BJP state unit president Dilip Ghosh and mayor Firhad Hakim.

Youths, political parties and commoners hit the streets and shouted anti-CAA and National Register of Citizens (NRC) slogans. Some of them also carried "Go Back, Modi" banners. Black flags were also visible everywhere.

In a tweet, PM Modi had said, "I am excited to be in West Bengal today and tomorrow. I am delighted to be spending time at the Ramakrishna Mission and that too when we mark Swami Vivekananda's Jayanti. There is something special about that place."

"Yet, there will be a void too! The person who taught me the noble principle of 'Jan Seva Hi Prabhu Seva', the venerable Swami Atmasthananda Ji will not be there. It is unimaginable to be at the Ramakrishna Mission and not have his august presence!" PM Modi tweeted.

PM Modi and Trinamool Congress chief Mamata Banerjee are likely to share stage twice during his two-day visit. The PM has a packed weekend with inaugurations. Banerjee, who has been invited for two events, may attend both, say reports.