The Prime Minister's call for a blackout urging citizens to light a lamp, candle or shine a mobile flashlight to dispel the darkness spread by the coronavirus, is expected to result in sudden drop in electricity demand across the country and has even the potential to disturb grid frequency creating potential situation for a grid collapse. 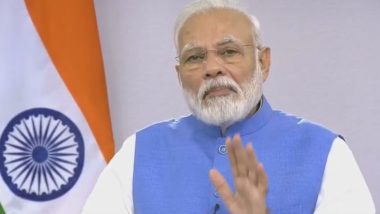 New Delhi, April 4: Prime Minister Narendra Modi's appeal for a 9-minute blackout at 9 p.m. on Sunday, has shaken the babus in the power ministry who have put themselves in a huddle to quickly devise a strategy to prevent the April 5 event from creating ground for a possible grid collapse and resultant blackout throughout the country.

The Grid stability in the country is maintained by keeping power frequency within a range specified by Central Electricity Regulatory Authority (CERC). Any deviation from identified frequency is managed by increasing or decreasing power flow in the grid. Sudden drop or increase in frequency causes a collapse. Catch Coronavirus Live News Updates.

The Prime Minister's call for a blackout urging citizens to light a lamp, candle or shine a mobile flashlight to dispel the darkness spread by the coronavirus, is expected to result in sudden drop in electricity demand across the country and has even the potential to disturb grid frequency creating potential situation for a grid collapse.

"Union Power Minister has discussed the issue (sudden fall in demand during April 5 blackout) with PGCIL (PowerGrid) and Load dispatcher in today's meeting. They are upto the task and are confident of managing the grid stability for the event," said a government spokesperson.

Power System Operation Corporation Limited (POSOCO), a wholly owned Government of India Enterprise, an entrusted with the task of ensuring the integrated operation of the Grid in a reliable, efficient, and secure manner, has also been sounded off to plan scheduling of power with all the five Regional Load Despatch Centres and National Load Despatch Centre (NLDC) so that grid frequency is maintained even if demand drops suddenly during the blackout.

Sources said that state government have also been told to be ready to manage the power scheduling if a need arise and keep some of their generating units in ready mode to switch off few units of grid frequency dropped suddenly. Central utilities like NTPC may also be keep in a state of readiness to switch off some of their gas based stations are easy to switch on and off as per grid requirements.

An official of PowerGrid Corporation, which operates the national grid of transmission network, said that though the situation calls for notice, it is not alarming and the grid operators are well prepared to handle sudden drop in power demand. BJP President JP Nadda Asks Workers to Spread Prime Minister Narendra Modi’s Message to Light Lamps on April 5 Among Masses.

"Actually considering the need of pan India lockdown due to COVID-19 pandemic, Peak Demand in the country is already lower by about 20 per cent. So, the national and regional load dispatch centres are already grappling with low demand a further drop on April 5, should not be a problem that can't be handled with ease," the official said.

(The above story first appeared on LatestLY on Apr 04, 2020 09:48 AM IST. For more news and updates on politics, world, sports, entertainment and lifestyle, log on to our website latestly.com).