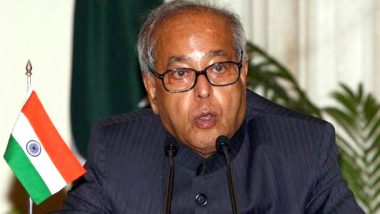 The hospital authorities said: "Former President Pranab Mukherjee continues to be in deep coma and on ventilator support. He is being treated for a lung infection and renal dysfunction. He is haemodynamically stable." Mukherjee's health condition deteriorated after he developed lung infection last week. On August 20, there was a slight improvement in his condition though he continued to be on ventilator support. Sharmistha Mukherjee Tweets Old Pictures of Pranab Mukherjee Hoisting National Flag on Independence Day, Says, 'I’m Sure He’ll Hoist The Tri-Colour Next Year’.

Following the hospitalisation on August 10, it was found that he had a large brain clot, for which he underwent the emergency procedure. He was also found to be COVID-19 positive. On August 10, Mukherjee had tweeted: "On a visit to the hospital for a separate procedure, I have tested positive for COVID-19 today. I request the people, who came in contact with me in the last week, to please self-isolate and get tested for Covid-19."

Though he remains on the ventilator support, rumours about his death have been doing rounds on social media platforms. The villagers of Kirnahar, the ancestral village of Mukherjee in West Bengal's Birbhum district, had performed a three-day religious ritual - Maha Mrityunjay Yajna - at the Japeshwar Shiva temple located in Mukherjee's native place Mirati, for his speedy recovery.

(The above story first appeared on LatestLY on Aug 27, 2020 11:53 AM IST. For more news and updates on politics, world, sports, entertainment and lifestyle, log on to our website latestly.com).