Reports inform that the 38-year-old woman along with three others were booked by the Pimpri-Chinchwad police on Saturday after a complaint was lodged in connection with this matter. 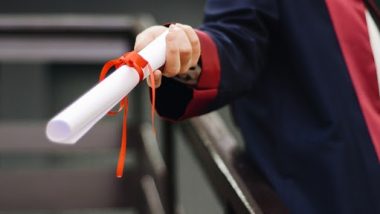 Pune, April 26: In another incident of fraud reported from Pune, a woman and three other people were booked for fooling people allegedly by forging MBA degree certificates. Reports inform that the 38-year-old woman along with three others were booked by the Pimpri-Chinchwad police on Saturday after a complaint was lodged in connection with this matter. According to a report by Hindustan Times, the group allegedly forged certificates were that of an MBA from an institution in Assam called Assam Downtown University. Pune: Class 12 Student Duped of Rs 3.6 Lakh on Online Dating App Promising Date With Woman.

The complaint was lodged by a man identified as 44-year-old Pramod Balaji Jana. He is a businessman living in Gujrat colony area of Kothrud and after he separated from his wife, he got the mobile phone he had allegedly given to her and was shocked to see the WhatsApp chats dated back to November 2019. In his complaint, he mentioned that in November 2019, he came across the WhatsApp messages that were stored in the mobile phone. The man claimed in his complaint that he found certified copies of some degree certificates and learned that they were forged.

(The above story first appeared on LatestLY on Apr 26, 2021 01:56 PM IST. For more news and updates on politics, world, sports, entertainment and lifestyle, log on to our website latestly.com).