A 50-year-old priest of a temple in Rajasthan was set on fire by the land mafia on Thursday. 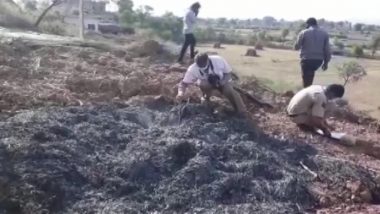 Site where the priest was set on fire (Photo Credits: ANI)

Karauli, October 9: A 50-year-old priest of a temple in Rajasthan was set on fire by the land mafia on Thursday. The horrific incident took place at Bukna village in Karauli district's Sapotra town. The temple priest, Babulal, succumbed to his injuries this morning. The prime accused, identified as Kailash Meena, has been arrested by police. A probe was underway to nab other assailants. Rajasthan Horror: 15-Year-Old Abducted, Gang-Raped in Barmer District.

According to reports, a group of people, believed to be land mafia, poured kerosene on Babulal and set him ablaze when he resisted an attempt by the accused to encroach upon the land that belonged to the temple. A part of the land was gifted to the priest who was constructing his house there. The priest was taken to Sawai Man Singh (SMS) hospital. Rajasthan Incest Shocker: 7-Year-Old Girl Accuses Alcoholic Father of Raping, Threatening to Kill Her With Sword in Bhilwara.

Temple Priest Set on Fire by Land Mafia in Sapotra:

Rajasthan: A temple priest succumbed to his injuries last night after he was allegedly burnt alive by few people during a scuffle over temple land encroachment at Bukna village in Sapotra, Karauli district. Police have arrested the main accused Kailash Meena (Pics from 8.10.2020) pic.twitter.com/9d3q8ZIzqp

"Priest Babulal gave a statement to police in the hospital that few influential people including accused Kailash Meena and his sons tried to encroach his land and during a dispute accused set the fence on fire in which priest got severely burnt," Karauli Superintendent of Police Mridul Kachhwa told ANI.

The priest, who had suffered 50 per cent burn injuries in the attack, died this morning. Reports suggested there were six assailants who attacked the priest. Police arrested the main accused Kailash Meena.

(The above story first appeared on LatestLY on Oct 09, 2020 11:13 AM IST. For more news and updates on politics, world, sports, entertainment and lifestyle, log on to our website latestly.com).