The statue will be installed near Karunanidhi’s mentor and former chief minister C N Annadurai at DMK headquarters. 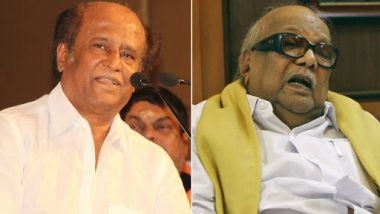 Though the Rajni Makkal Mandram (RMM) chief has not confirmed the news as of yet, the close sources have said that he might join the event scheduled on Sunday. Earlier, the party in November had announced that they would set up a life-size statue of late party president M Karunanidhi at it's headquarters – Anna Arivalayam – on December 16. Bharat Ratna For M Karunanidhi? Resolution Passed At DMK General Council Meeting.

According to the press release from the party – released on December 14 – leaders from national and regional parties would be invited for the grand function. The statement said, “The statue will be installed near Karunanidhi’s mentor and former chief minister C N Annadurai.”

The opposition party in Tamil Nadu also informed that they would unveil the statue of Annadurai – removed for refurbishing – along with the statue of Karunanidhi on Sunday.

Karunanidhi, who passed away on August 7 this year aged 94, was addressed as ‘Kalaignar’ by party workers and supporters. The DMK chief, one of the foremost Dravidian politicians in modern times, breathed his last at a Chennai hospital where he was admitted. Tamil Nadu Chief Minister K Palaniswami said the DMK leader left his "imprint" in national politics and his demise was a "big loss" to Tamil Nadu.

(The above story first appeared on LatestLY on Dec 15, 2018 10:19 AM IST. For more news and updates on politics, world, sports, entertainment and lifestyle, log on to our website latestly.com).