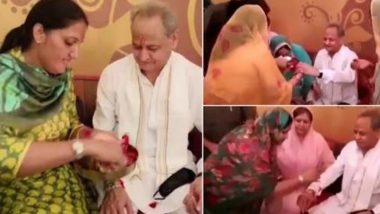 The Congress MLAs left from Fairmont Hotel for the airport on Friday morning. They were shifted to Jaisalmer. Nearly 100 Rajasthan Congress MLAs, who have been staying at the hotel near Jaipur since Sachin Pilot launched a revolt against Chief Minister Ashok Gehlot, were reportedly moved to Jaisalmer by a special flight. Raksha Bandhan 2020: Shivraj Singh Chouhan Gets Rakhi Tied by a Nurse Deployed at Madhya Pradesh CM's Ward in Hospital; View Pics.

Earlier in the day, Madhya Pradesh Chief Miniter Shivraj Singh Chouhan was tied a rakhi by nurse Saroj, who is deployed at the ward in which Shivraj Singh Chouhan is admitted. Chouhan had tested positive for coronavirus on July 25. According to the images shared by ANI, the nurse can be seen wearing a PPE kit while following the popular Hindu tradition. Chouhan was also seen giving his blessing to her.

(The above story first appeared on LatestLY on Aug 03, 2020 03:29 PM IST. For more news and updates on politics, world, sports, entertainment and lifestyle, log on to our website latestly.com).