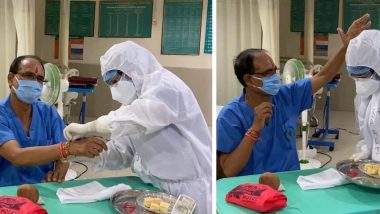 Bhopal, August 3: Saroj, a nurse tied rakhi to Madhya Pradesh Chief Minister Shivraj Singh Chouhan at a hospital in Bhopal on account of Raksha Bandhan today. The nurse Saroj is deployed at the ward in which Shivraj Singh Chouhan is admitted. Chouhan had tested positive for coronavirus on July 25.

According to the two images shared by ANI, the nurse can be seen wearing a PPE kit while following the popular Hindu tradition. Chouhan can also be seen giving his blessing to the nurse. Ram Rajya Will Come to India Under PM Narendra Modi’s Leadership With the Construction of Ram Mandir in Ayodhya, Says Shivraj Singh Chouhan.

Saroj, a Nurse Ties Rakhi to CM Shivraj Singh Chouhan at a Hospital:

Saroj is deployed at the ward in which Shivraj Singh Chouhan is admitted. He had tested positive for #COVID19 on July 25. #RakshaBandhan2020 pic.twitter.com/lzlx2fx1bv

Earlier in the day, CM Chouhan said that he has a belief that with the construction of Ram Temple in Ayodhya, Ram Rajya will come to the country under Prime Minister Narendra Modi's leadership. The day started with leaders like Narendra Modi and Vice President Ram Nath Kovind extending their greetings on the festive occasion of Rakhi. Raksha Bandhan is an important ritual in the Hindu calendar which celebrates the beautiful bonding between brothers and sisters.

(The above story first appeared on LatestLY on Aug 03, 2020 02:38 PM IST. For more news and updates on politics, world, sports, entertainment and lifestyle, log on to our website latestly.com).