The MPC further said that higher fiscal deficit in 2019-20 has not resulted in an increase in market borrowings compared to the budget estimates. 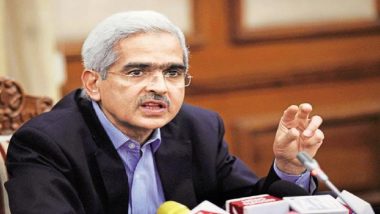 Mumbai, February 6: The monetary policy committee (MPC) of the Reserve Bank of India (RBI) on Thursday kept the repo rate unchanged at 5.15 per cent and maintained accommodative stance. Reportedly, the MPC noted that inflation surged above the upper tolerance band around the target in December 2019, primarily on the back of the unusual spike in onion prices. Over the coming weeks and months, it said the onion prices will decrease as supply conditions improve.

RBI governor Shaktikanta Das said that excluding onions, food inflation would have been lower by 4.7 percentage points and headline inflation by 2.1 percentage points in December. He further said that inflation in several other food sub-groups such as milk, pulses, cereals, edible oils, eggs, meat and fish also firmed up. GDP Growth Forecast Slashed From 6.1% to 5% by RBI Monetary Policy Committee for FY 2019-20, Inflation Target Also Revised.

The MPC further said that higher fiscal deficit in 2019-20 has not resulted in an increase in market borrowings compared to the budget estimates. It said, "The fiscal deficit is budgeted to decline to 3.5 percent of GDP for 2020-21."

According to reports, RBI anticipated inflation to remain elevated in short-run and the outlook for inflation remains highly uncertain.  RBI pegged GDP growth for 2020-21 at 6 percent.

During the announcement, Sensex was trading at 41,282, up 139 points and Nifty on the other hand was also in the green at 12,129. The shares of the housing finance companies moved higher after the RBI said that 'no downgrade of commercial realty loan if delay genuine'.

(The above story first appeared on LatestLY on Feb 06, 2020 12:15 PM IST. For more news and updates on politics, world, sports, entertainment and lifestyle, log on to our website latestly.com).