Over the past years, the oil-to-telecom conglomerate has segregated businesses into separate verticals - Jio Platforms houses the company's digital and telecom unit, retail is a separate unit and oil refining and petrochemical segments have been carved into the O2C sector to attract strategic partnerships. 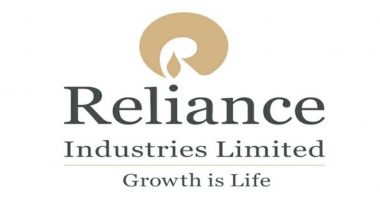 Mumbai, June 24: Saudi Aramco chairman and head of the Kingdom's cash-rich wealth fund PIF Yasir Othman Al-Rumayyan will join the board of Reliance Industries Ltd as an independent director in a precursor to a USD 15 billion deal.

Reliance Chairman and Asia's richest man Mukesh Ambani, who had two years back disclosed the talks to sell a 20 per cent stake in the company's oil-to-chemical unit to Saudi Aramco, announced the appointment of Al-Rumayyan at the company's annual meeting of shareholders.

Harvard educated Al-Rumayyan, 51, will replace Yogendra P Trivedi, 92, who has expressed a desire to retire, Ambani said. On the sale of a 20 per cent stake in the O2C business, he said the deal is likely to conclude this year. Reliance AGM 2021: JioPhone Next Affordable Smartphone Announced, To Be Available on September 10, 2021.

"Despite several challenges due to COVID-19, we have made substantial progress in the past in our discussions (with Saudi Aramco)," he said. "This continued engagement and resolve from both sides, even during this pandemic, is a testimony of strong relationship between Saudi Aramco and Reliance.”

Ambani said RIL is looking forward to "welcoming Saudi Aramco as a strategic partner in our O2C business". "I expect our partnership to be formalised in an expeditious manner during this year," he added.

In 2019, he had announced a USD 75 billion valuation of the O2C venture, which houses the group's oil refineries and petrochemical units as well as fuel retailing. A 20 per cent stake to Aramco was valued at USD 15 billion. But, on Thursday, he did not put any value.

"I am delighted to welcome Yasir Al-Rumayyan, Chairman of Saudi Aramco and the Governor of the Public Investment Fund, to join the board of Reliance Industries Ltd as an independent director," Ambani said.

Besides bringing his vast financial experience, the induction of Al-Rumayyan, who also sits on the board of SoftBank Group Corp and Uber Technologies, will bring down the average age of the board of directors of Reliance.

Over the past years, the oil-to-telecom conglomerate has segregated businesses into separate verticals - Jio Platforms houses the company's digital and telecom unit, retail is a separate unit and oil refining and petrochemical segments have been carved into the O2C sector to attract strategic partnerships.

Under Al-Rumayyan, PIF has invested billions of dollars in RIL ventures.

"I am sure that we will immensely benefit from his rich experience of running one of the world's largest companies, and also one of the largest sovereign wealth funds in the world," he said. "His joining our board is also the beginning of the internationalisation of Reliance. You will hear more about our international plans in the times to come."

An accounting graduate from King Faisal University, Saudi Arabia who went on to do a general management programme at Harvard Business School, Al-Rumayyan is the Governor of Public Investment Fund (PIF) since May 2019. He was appointed chairman of the board of Saudi Aramco in September 2019.

Ambani had in August 2019 announced talks for the sale of a 20 per cent stake in the oil-to-chemicals (O2C) business, which comprises its twin oil refineries at Jamnagar in Gujarat and petrochemical assets to the world's largest oil exporter.

The deal was to conclude by March 2020 but has been delayed.

Talks have revived this year and the two are reportedly discussing a cash and share deal - Aramco paying for the stake with its shares initially and then staggered cash payments over several years.

Besides refineries and petrochemical plants, the O2C business also comprises a 51 per cent stake in the fuel retailing business. It, however, does not include the upstream oil and gas producing assets such as the flagging KG-D6 block in the Bay of Bengal.

RIL had in 2019 put USD 75 billion as the value of the O2C business after signing a non-binding letter of intent with Saudi Aramco. The firm had recently announced carving out the O2C business as a separate subsidiary to support strategic partnerships and new investors in order to accelerate its new energy and material plans. Reliance AGM 2021: Jio 5G Service, JioPhone 5G & JioBook Expected To Be Launched Today; Watch LIVE Streaming Here.

Digital business is already held by a subsidiary Jio Platforms and Reliance Retail holds the offline and online retail business. Aramco buying 20 per cent in O2C business would allow Reliance to build financial muscle, as it carves out a space for itself in highly competitive omnichannel retail.

With a stake, Aramco would have a share in one of the world's best refineries and largest integrated petrochemical complex. It has access to one of the fastest-growing markets, a ready-made market for 5 lakh barrels per day of its Arabian crude and offering a potentially bigger downstream role in the future.