Republic Day 2020: Human Chain Comprising of People From All Faiths Planned in Kolkata to Protest Against CAA

The meeting was chaired by Archbishop Thomas D'Souza. And it was decided at the meeting that a human chain would be formed spanning the south and north of the city, reported the English daily. 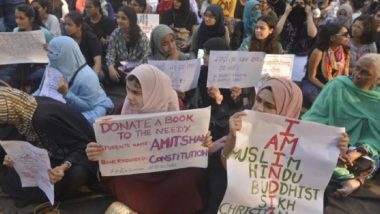 Kolkata, January 22: People of all religion will come together in Kolkata under the leadership of Roman Catholic Church and raise voice against the NRC (National Register of Citizens) and CAA (Citizenship Amendment Act) on the Republic Day this year. The initiative has been taken by an organisation which comprises of people from all faith, named the United Interfaith Foundation India. Why Citizenship Amendment Act+NRC Raise Fear And Concerns: A Multi-Dimensional Take.

The decision to form the chain of people from all faith on Republic Day was taken after a meeting at the Archbishop House over the weekend, reported The Times of India. The foundation said that it has chosen Republic Day to form the chain because it believes that acts such as CAA and the proposed (NRC) mount a "challenge" to the Constitution of India. Prashant Kishor Takes 'Aap Chronology Samajh Lijiye' Jibe at Amit Shah, Dares Home Minister to Announce Nationwide NRC.

The meeting was chaired by Archbishop Thomas D'Souza. And it was decided at the meeting that a human chain would be formed spanning the south and north of the city, reported the English daily.

The General Secretary of the organisation, Satnam Ahluwalia, said that the formation of the chain will begin from the Jadavpur University and last up to the Netaji statue at Shyambazar. They said that they will talk to organisations which have held protests against the Citizenship Amendment Act and ask them to join as well. He informed that the police permission has not been granted yet. The Republic Day has been chosen as  a "symbolic" day to highlight the importance of Constitution and the dangers posed to it from acts such as CAA, said Ahluwalia.

(The above story first appeared on LatestLY on Jan 22, 2020 04:38 PM IST. For more news and updates on politics, world, sports, entertainment and lifestyle, log on to our website latestly.com).