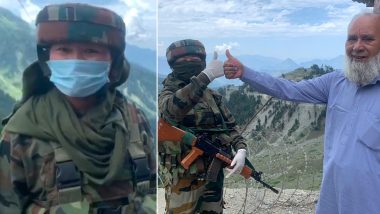 Srinagar, August 4: In the first, women soldiers of Assam Rifles, India’s oldest paramilitary force, have been deployed along the Line of Control (LoC) in Jammu and Kashmir. These 'rifle women' are on deputation with the Indian Army. The women soldiers were deployed at an altitude of ten thousand feet, at the top of the Sadhana Top of the LoC. Permanent Commission to Women in Army: Supreme Court Grants Centre 1 Month to Comply With February Verdict.

According to a report published in Zee News, to assist the Indian Army a platoon of ‘rifle women’ has been deployed in the region. A female captain of the Indian Army is leading the nine ‘rifle women’. They will have been tasked to guard the road going towards the LoC. Their responsibility is to search vehicles coming from villages between the Tangdhar and Tithwal areas near the LoC. Videos of these rifle women are also doing rounds on social media. Women Officers in Indian Army Now Eligible For Permanent Commission, Govt Issues Formal Sanction.

Incredible! Indian Army Riflewomen deployed for the first time along Line of Control between India and Pakistan in Jammu & Kashmir. Proud to share this on Rakshabandhan! Here are the brave women soldiers protecting us all! Respect! pic.twitter.com/ZNUxJPQk4u

The Assam Rifles in a tweet said, “Women soldiers of #AssamRifles deployed for the first time in Kashmir make a positive impact on the local populace in a matter of days. Smiling faces of locals is a testimony of professionalism of the Riflewomen of Assam Rifles.”

Women soldiers of #AssamRifles deployed for the first time in Kashmir make a positive impact on the local populace in a matter of days. Smiling faces of locals is a testimony of professionalism of the Riflewomen of Assam Rifles. @SpokespersonMoD @PIBHomeAffairs @ANI pic.twitter.com/fW6Lx71y7p

The Assam Rifles is the oldest paramilitary force of India. It is under the control of the Indian Ministry of Home Affairs (MHA). However, the force performs many roles, including the provision of internal security under the control of the Army through the conduct of counter insurgency and border security operations. The Director-General of the Assam Rifles (DGAR) is the head of the Assam Rifles. The Director-General of the Force is an Indian Army Officer of the rank of Lieutenant General.

(The above story first appeared on LatestLY on Aug 05, 2020 12:32 AM IST. For more news and updates on politics, world, sports, entertainment and lifestyle, log on to our website latestly.com).