Education Minister B.C. Nagesh had earlier announced that students wearing hijab will not be allowed to appear in the exams. 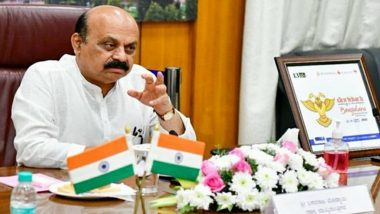 Hubballi, March 27: Karnataka Chief Minister Basavaraj Bommai on Sunday has called upon SSLC (class 10) students to write their exams without any fear.

Speaking to reporters against the backdrop of SSLC exams starting from Monday, he said, all arrangements have been made for smooth conduct of exams. "Write exams without bothering about anything and make your careers," he said. President Ram Nath Kovind Expresses Condolence Over Loss of Lives in Chittoor Bus Accident.

Education Minister B.C. Nagesh had earlier announced that students wearing hijab will not be allowed to appear in the exams.

Opposition leader Siddaramaiah has urged the government to consider permitting students wearing dupattas around their head to write exams.

Congress State President D. K. Shivakumar has appealed to parents as well as the ruling BJP government to convince students about the High Court verdict and see to it that their career is not affected.

The state government has clamped prohibitory orders in and around examination centres across the state to ensure smooth conduct of exams.

The budget session is ending on March 30. The officers have been directed to implement all projects announced in the budget, Bommai said.

(The above story first appeared on LatestLY on Mar 27, 2022 03:37 PM IST. For more news and updates on politics, world, sports, entertainment and lifestyle, log on to our website latestly.com).