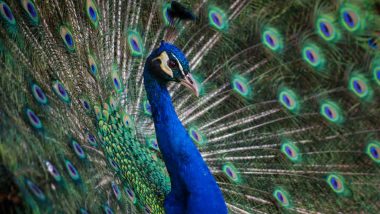 Tuticorin, September 17: In a shocking incident, at least 28 peacocks were found dead in Tamil Nadu’s Tuticorin district on Wednesday. The peacocks were found dead in mysterious circumstances at a farmland between Pilayarnatham and Andipatti villages near Kovilpatti area of the district, reported The Times of India. Senior officials have reached the spot. An investigation has been initiated in the matter. Elephant Carcass With Mouth Injury Found on Road in Tamil Nadu's Sholayur Area.

According to the TOI report, it is suspected that peacocks died after consuming seeds with pesticides. After seeing 28 peafowls dead in their fields, farmers informed the forest department of the area. In the autopsy report, indigested corn was found in the stomach of the birds. Elephant Dies in Chhattisgarh, Herd of Elephants Gather Around Dead Body in Surajpur, Carcass Yet to Be Retrieved by Forest Department.

According to the initial investigation, it was found that some farmers mix seeds with pesticide to avert early damage, while others used DAP for good growth. Forest range officer Sivaram told the media house that the action would be taken against who mixed seeds with poison.

Notably, crops like corn, maize, green gram and pulses are cultivated in the area. Farmers are also advised not to carry out those agriculture activities that harm birds.

(The above story first appeared on LatestLY on Sep 17, 2020 11:13 AM IST. For more news and updates on politics, world, sports, entertainment and lifestyle, log on to our website latestly.com).