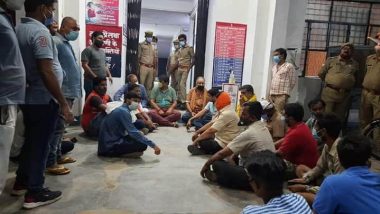 Unnao, July 30: Bharatiya Janata Party lawmaker in Uttar Pradesh's Unnao town -- Pankaj Gupta -- on Wednesday held a five-hour-long overnight sit-in protest with his supporters outside Sadar police station. He accused the local policemen of having a 'casteist mindset' and stating that they have a 'negligent attitude'.

According to a report, published in the NDTV, the Unnao MLA arrived at Sadar police station with his supporters and held a sit-in protest. He accused that the local police station was 'still exhibiting Samajwadi Party mindset'. Uttar Pradesh: Married Couple Found Hanging From Tree in Nagla Bora Vasundhara Village.

The BJP MLA sat at the entry of the police station and refused to end the protest until senior police officers came to meet him in the morning. Gupta claimed that the protest is not against the Yogi Adityanth government but the 'negligent attitude' of policemen who still exhibit 'Samajwadi Party mindset'.

Speaking to the media, Gupta had said, "Today all limits were crossed. An old woman was assaulted and fired upon. I called the cops and they said we don't have time right now ... 'we will leave to make arrests later', I was told. As a party, the BJP has treated the police like corona warriors. The Chief Minister has also given the freedom to work. But the police officials here have clear Samajwadi Party mindset... They just do not want to get out of their casteist mindset."

Meanwhile, police said that BJP leader was angry over the action taken by police to evict encroachment of government land for the building of a temple. Gupta had alleged that people were beaten up during the eviction.

(The above story first appeared on LatestLY on Jul 30, 2020 11:12 AM IST. For more news and updates on politics, world, sports, entertainment and lifestyle, log on to our website latestly.com).