As voting for the US presidential election kicked off on Tuesday, members of Hindu Sena, a fringe out, conducted special prayers in Delhi for Donald Trump's victory. 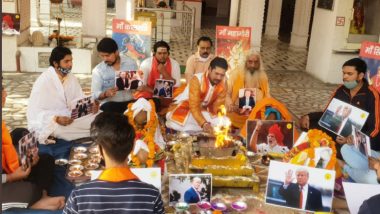 New Delhi, November 3: As voting for the US presidential election kicked off on Tuesday, members of Hindu Sena, a fringe out, conducted special prayers in Delhi for Donald Trump's victory. Members of Hindu Sena held special prayers at a temple in east Delhi in the presence of a priest. They sought blessings for Donald Trump and performed rituals for his victory in the US presidential elections 2020. Catch Live Updates on US Presidential Election.

At the special Puja ceremony, special mantras were chanted and a havan was organised. The rituals lasted for 30 minutes. "Even for his last election, we sought blessings for his victory. This time again we are seeking blessings for Donald Trump’s victory in the US presidential elections. His winning will not only be a victory for the world, but also for India as the US has been a good ally for us against China and Pakistan," Hindu Sena chief Vishnu Gupta told India Today. Telangana Farmer Who 'Spent Sleepless Nights, Starving and Praying for Donald Trump's Recovery From COVID-19' Dies of Cardiac Arrest.

Ved Shastri, the priest who performed the rituals, said that Trump must get support from across the world as the Republican leader has been vocal against Islamic radicals. He said it is important for Trump to win the US presidency given what is happening in the West. A couple of years ago, the same Hindu Sena had celebrated Donald Trump's birthday by cutting a cake at Delhi’s iconic Jantar Mantar.

According to the latest RealClearPolitics polling average, incumbent Democratic presidential nominee Joe Biden was leading Trump by 6.7 percentage points nationally, but only by 2.8 percentage points in top battleground states, including Florida, North Carolina, Pennsylvania, Michigan, Wisconsin, and Arizona. Besides the Trump-Biden race, all 435 seats in the US House of Representatives and 35 of the 100 seats in the Senate are also in the fray.

(The above story first appeared on LatestLY on Nov 03, 2020 04:22 PM IST. For more news and updates on politics, world, sports, entertainment and lifestyle, log on to our website latestly.com).