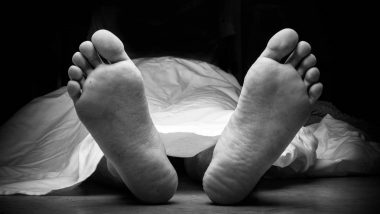 Lucknow, October 24: Pushpa, wife of Director General of Police (DIG) Chandra Prakash in Uttar Pradesh, died by suicide on Saturday. According to reports, Pushpa was found dead at her residence in Sushant Golf City in Lucknow. No suicide note was found. An investigation was underway by the UP police to ascertain the cause of her death. It also remains unclear what forced her to take the extreme step if it is a suicide. Uttar Pradesh: 22-Year-Old Woman Dies by Suicide After Allegedly Being Beaten Up by Police.

Pushpa, 38, was rushed to Lohiya Hospital where doctors declared her dead upon arrival. DIG Chandra Prakash is currently posted at Police Training School in Unnao. An Indian Police Service (IPS) officer of 2004 batch, Chandra Prakash was promoted to the rank of DIG in January 2018. He was posted in Unnao in March, 2018. Chitrakoot Gangrape: 2 Policemen Suspended for Late Action after Dalit Girl Dies by Suicide.

DIG Chandra Prakash is also a part of the Special Investigation Team formed by Uttar Pradesh Chief Minister Yogi Adityanath to probe the Hathras incident. A 19-year-old Dalit was found brutalised in Hathras on September 14. She died on September 29. She alleged gangrape by four upper-caste men.

(The above story first appeared on LatestLY on Oct 24, 2020 12:30 PM IST. For more news and updates on politics, world, sports, entertainment and lifestyle, log on to our website latestly.com).