Uttar Pradesh: 22-Year-Old Woman Dies by Suicide After Allegedly Being Beaten Up by Police

A 22-year-old woman committed suicide in Uttar Pradesh's Jalaun after she was allegedly beaten up by a police inspector. The incident took place in Naya Ramnagar area. 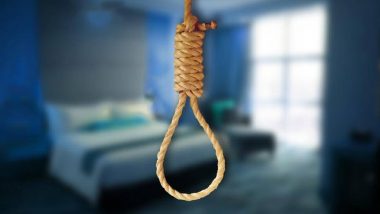 Jalaun, Aug 10: A 22-year-old woman committed suicide in Uttar Pradesh's Jalaun after she was allegedly beaten up by a police inspector. The incident took place in Naya Ramnagar area.

The deceased, Nishu Chaudhary, was found hanging by a noose at her house on Saturday. The family rushed her to the hospital but doctors declared her dead.

According to Nishu's family, she had gone to the market in Baldau Chowk on Friday afternoon. Uttar Pradesh Man Hangs Himself in His Office in Saharanpur, Suicide Note Says He Was Afraid of Coronavirus.

Some shopkeepers accused the victim and two of her friends of stealing passports and caught them. They called the police and handed them over to inspector Yogesh Pathak.

Police took the three to the Kotwali police station and after questioning they were handed over to their relatives.

Her family members said Yogesh Pathak beat up Nishu at the station. She was called to Kotwali by police again on Saturday and was stressed about it.

"She was very disturbed since the beating by the inspector," said a family member.

After Nishu committed suicide, her family went to the police station and created a ruckus, demanding action against the inspector.

Circle Officer (CO) Santosh Kumar reached the spot and assured the family that the matter will be investigated.

(The above story first appeared on LatestLY on Aug 10, 2020 10:10 AM IST. For more news and updates on politics, world, sports, entertainment and lifestyle, log on to our website latestly.com).