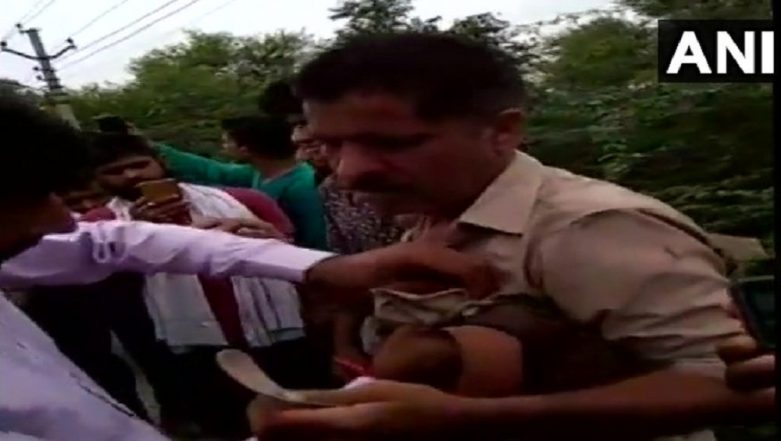 Bulandshahr, August 9: In another incident of embarrassment for Uttar Pradesh police, a constable was thrashed by locals after his car rammed into two motorcycles in Bulandshahr. The video of people beating the inebriated cop is doing rounds on social media. An inquiry has been ordered against the policeman Manoj Kumar who was reportedly drunk during the time of the incident.

According to a report published in The Times of India, the incident took place in Sikandrabad area of Bulandshahr district on Monday. The constable who belonged to Noida was on a Karwar duty in Bulandshahr. According to the report, three people were injured in the incident, one of them is critical. After hitting the bikers, he rammed his car into the tree.

Here is the video of locals thrashing the police constable:

After the incident, locals gathered at the spot and removed the constable’s belt and thrashed him with it and also tore his uniform. Kumar was then handed over to the local police. According to the report, an FIR was registered at Sikandrabad police station, and Noida police station was also informed about the incident.

The incident was reported just two days after the state government suspended three policemen in Agra as they were caught on camera saying how they would falsely implicate someone by planting evidence, subsequently naming him an accused.