The victim, Ranjit, along with his mother, on Wednesday evening, reached Baradari police station with nails drilled in his hand and foot, and blamed the police. However, Bareilly SSP Rohit Singh Sajwan, refuted the allegations and termed them baseless. 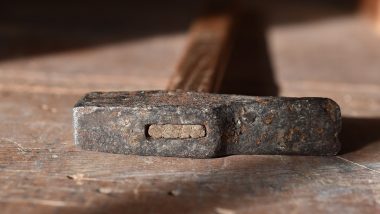 Bareilly, May 27: In a shocking incident, a man has alleged that the Bareilly police hammered nails into his hand and foot for violating the Corona curfew. The victim, Ranjit, along with his mother, on Wednesday evening, reached Baradari police station with nails drilled in his hand and foot, and blamed the police. However, Bareilly SSP Rohit Singh Sajwan, refuted the allegations and termed them baseless. He said that the injuries were self-inflicted to evade arrest in another case registered against Ranjit at Baradari police station.

"He did all this drama to save himself from the police. The charges levelled by him were not found to be true in the probe," the SSP said. He said that an FIR was registered against Ranjit, a resident of Jogi Navada, on May 24 for misbehaving with a police constable who had asked him not to move out without a mask in public. Mumbai Man Murders 37-Year-Old Woman Teacher With Hammer, Then Jumps to Death in Bhandup.

"The accused was absconding after the incident and police were searching for him," the SSP said. The police went to Ranjit's house on Tuesday night, but he was not found. In 2019, Ranjit was arrested by the police for entering a temple in an inebriated state and damaging the idols there.

Following this, the cops allegedly took him to the local police post and beat him up again. "They tied my hands and nailed my hand and feet. I cannot even properly hear from my left ear as it is bleeding. The cop who nailed me lives in our locality. I can recognize him. They have now slapped eight cases against me. I am a poor man and hardly earn 150-200 a day as a ragpicker," he told reporters.

(The above story first appeared on LatestLY on May 27, 2021 09:21 AM IST. For more news and updates on politics, world, sports, entertainment and lifestyle, log on to our website latestly.com).