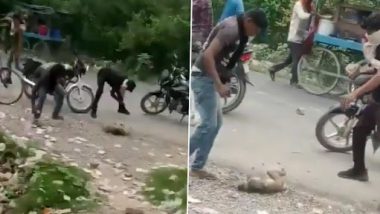 Monkey Stoned to Death in UP. (Photo Credits: Twitter)

He added that the three youth were booked under Indian Penal Code Section 147 for causing nuisance, Section 223 for trying to escape from police custody and Section 429 for causing mischief by killing or maiming an animal. Karnataka Monkey Killings: 7 Arrested For Allegedly Killing 38 Monkeys in Hassan District.

This Incident is from Amethi , Uttar Pradesh.

A Monkey beaten to death by these Monsters, Strictest action should be taken against them.@Uppolice @amethipolice @PetaIndia@dgpuppic.twitter.com/lefVoPE1WY

The police officer said the FIR was lodged on the complaint of one Devendra Singh, who tried to rescue the monkey but was chased away by the three youth. According to police, the incident took place near a beer shop at Durgapur market under Piparpur police circle of Amethi district.

The monkey was apparently injured and sitting on the roadside near the beer shop when three youth came out of the shop in an inebriated state. They started throwing stones at the monkey who could not move due to injuries. They kept attacking the animal till it became motionless.

(The above story first appeared on LatestLY on Jun 30, 2022 09:19 AM IST. For more news and updates on politics, world, sports, entertainment and lifestyle, log on to our website latestly.com).