Uttar Pradesh: Stray Dog Attacks 24 People Including a Five-Year-Old Girl in Ayodhya in a Day

In just 24 hours, a stray dog has attacked 24 people in Ayodhya, including a five-year-old girl who is said to be critical. 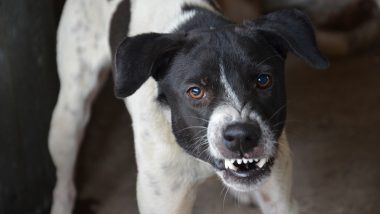 Ayodhya, May 27:  In just 24 hours, a stray dog has attacked 24 people in Ayodhya, including a five-year-old girl who is said to be critical.

On Thursday, the dog attacked devotees at Ram ki Pairi and doctors at the Shri Ram hospital said that they had received 20 cases, including three children, of dog bite.  Delhi Shocker: Stray Dog Stabbed to Death By 28-Year-Old Man in Kalyanpuri, Arrested

The residents who made several attempts to catch the dog said that they had informed the district and forest officials but no action had been taken.

The locals claim that the dog is mad and hence, a bigger threat to people in the area.

A local resident Sanjay Pandey, whose niece has been bitten by the dog, said the girl's condition was serious.

The district officials, meanwhile, said that they had informed the municipal authorities and the dog would be caught at the earliest.

(The above story first appeared on LatestLY on May 27, 2022 09:05 AM IST. For more news and updates on politics, world, sports, entertainment and lifestyle, log on to our website latestly.com).