To thwart a call by a Hindu outfit to recite the Hanuman Chalisa inside Shahi Eidgah mosque on December 6, the Mathura city magistrate has issued bailable warrants against 16 people connected to the outfit. 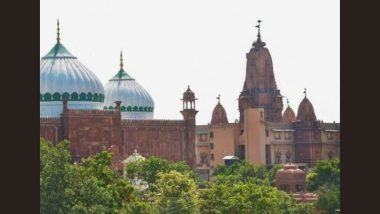 Mathura, Dec 2: To thwart a call by a Hindu outfit to recite the Hanuman Chalisa inside Shahi Eidgah mosque on December 6, the Mathura city magistrate has issued bailable warrants against 16 people connected to the outfit.

Mathura Senior Superintendent of Police (SSP) Martand Prakash Singh said that no permission has been sought by any organisation and cases have already been registered against two people so far for attempting to gather a crowd for the event. Muslim College Row: Ruling BJP in Karnataka Takes U-Turn, CM Basavaraj Bommai Says ‘Matter Not Discussed at All’.

Last month, the Akhil Bhartiya Hindu Mahasabha (ABHM) had urged all its leaders and supporters to arrive at the mosque, adjacent to Sri Krishna Janmabhoomi, which is believed to be the birthplace of Lord Krishna, on December 6 to recite the Hanuman Chalisa.

ABHM president Rajyashree Bose Chaudhary had said, "The event will take place on December 6. The peaceful recital of Hanuman Chalisa will be conducted at Sri Krishna Janmabhoomi between 12 and 12.30 p.m."

Sanjay Kumar Pandey, SHO of the Govind Nagar police station said around three dozen people have already been bound by notices. Being bound by a notice is a situation wherein an executive magistrate serves a show cause notice with a surety bond to a person on the apprehension that he/she may disturb the peace.

"Those who failed to respond and fill the required surety bond have been issued bailable warrants by the court of the city magistrate. Sixteen people have been issued warrants," he said. Gyanvapi Mosque Case: Varanasi Court Dismisses Masjid Committee's Petition Challenging Maintainability of Title Suit.

Chaudhary, meanwhile, condemned the police action and said, "We have planned a peaceful event. As such, there is no reason for police to intervene because we will offer prayers at the site."

The ongoing dispute involves ownership of 13.37 acres, which the petitioners claim belongs to the Lord Shri Krishna Virajman.

(The above story first appeared on LatestLY on Dec 02, 2022 10:43 AM IST. For more news and updates on politics, world, sports, entertainment and lifestyle, log on to our website latestly.com).