The National Board for Wildlife (NBWL) on Monday approved the long-pending construction of Laldhang-Chillarkhal road, reported The Times of India. The proposed road will cut down travel time between Garhwal and Kumaon. It will pass through the reserve forest area of Rajaji Tiger Reserve (RTR) 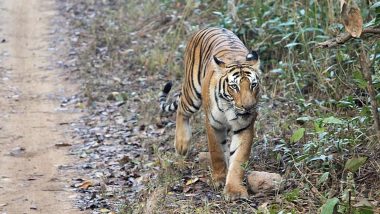 Dehradun, February 4: The National Board for Wildlife (NBWL) on Monday approved the long-pending construction of Laldhang-Chillarkhal road, reported The Times of India. The proposed road will cut down travel time between Garhwal and Kumaon. It will pass through the reserve forest area of Rajaji Tiger Reserve (RTR). The entire length of the road will be 11.5-km out of which 4.5 km stretch from Chamaria Bend to Siggadi Sot is a wildlife corridor between Corbett Tiger Reserve (CTR) and RTR. Tiger Spotted in Residential Area Near Jim Corbett National Park, ‘Human-Wildlife Conflict’ on Rise As Wildlife Corridors Shrink; Watch Video.

The project was put on hold in June last year by the Supreme Court. The top court directed the state government to first get clearance from the National Tiger Conservation Authority (NTCA) and NBWL. After the apex court’s directions, the NTCA asked Dehradun-based Wildlife Institute of India (WII) to submit its report on the project.

Scientists of WII recommended “status quo” on the 4.5 km stretch. They told TOI, “Status quo should be maintained on the stretch between Chamaria Bend and Sigaddi Sot. The black topping should be avoided in this route considering wildlife movement in the area. However, the forest department may maintain this portion regularly by using ‘murram’ so as to allow passage of vehicles.” Uttarakhand: Swedish Royal Couple Visits Jim Corbett National Park.

Ignoring, WII suggestions, NTCA approved the project. It said that a 100-metre-long underpass could be constructed after every one-kilometre road on the stretch. NBWL also gave a green signal to the project. However, NBWL extended the limit for the length of underpasses from 100 metres to 150 metres after every kilometre.

The total length of underpasses on the Laldhang-Chillarkhal road would be 705 metres. According to wildlife experts, these underpasses would not be sufficient for the smooth movement of animals. In 2014, a forest department committee had also given a suggestion of building a fly-over of 7.5 km in the area, so the movement of animals is not obstructed.

Centre for Wildlife and Environmental Litigation (CWE) has raised concerns over the decision of NBWL and NTCA. Bhanu Bansal of CWE told the media house that the organisation had raised the matter in NGT as well as the Supreme Court.

(The above story first appeared on LatestLY on Feb 04, 2020 11:19 AM IST. For more news and updates on politics, world, sports, entertainment and lifestyle, log on to our website latestly.com).