Trivendra Singh Rawat said many celebrities have shared old pictures from other countries to portray that "Uttarakhand is burning". 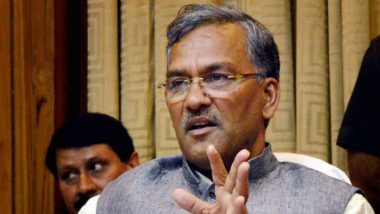 Retweeting data shared by the Indian Forest Service Association of Uttarakhand, Rawat said incidents of forest fires this year are "way less" than the previous year. According to the graphic, less than 100 hectares of the area has been affected by forest fires as of May 25. Comparatively, around 1,600 hectares were under the brunt of forest fires by the same time in the last year. Pictures of forest fires from 2016 and 2019 were circulated to mislead people, Rawat said. Uttarakhand Forest Fires' Fake Pics Spread Rapidly on Social Media! Officials Request Not to Panic and Stop Sharing Old Photos (Check Tweets).

"A misleading propaganda, using old pics of forest fires of 2016 & 2019 & that of forest fires in Chilean & Chinese forests, is raging on SM (social media)," the Chief Minister said in his tweet. "I req (request) everyone to not believe such motivated campaign. Fire incidents reported until yesterday is way less than PY (sic)," he added. Some of the photos that are being linked to Uttarakhand, Rawat claimed, were actually from forest fires in Chile and China.

A misleading propaganda, using old pics of forest fires of 2016 & 2019 & that of forest fires in Chilean & Chinese forests, is raging on SM. I req everyone to not believe such motivated campaign. Fire incidents reported until yesterday is way less than PYhttps://t.co/d5R4aq5mjW

"I am upset to say that several prominent personalities have become part of 'Uttarakhand is burning' misleading campaign on social media. I expect you not to misuse your name this much," he said in one of his tweets in Hindi. ,  Forest fires are not uncommon in Uttarakhand. Social media is flooded with unrelated pictures with claims that forest fires are raging in Uttarakhand, causing heavy damages.

According to reports, Uttarakhand has lost nearly 51.43 hectares of forest cover in fires. Moreover, over half the wildlife species are in danger. The Kumaon region has been the worst-hit area with 21 wildfires incidences so far.

(The above story first appeared on LatestLY on May 27, 2020 08:06 PM IST. For more news and updates on politics, world, sports, entertainment and lifestyle, log on to our website latestly.com).