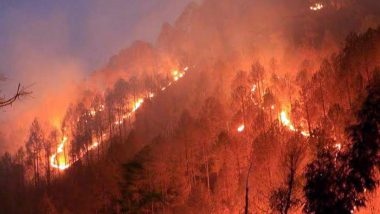 Dehradun, May 27: Forest fires have been raging in Uttarakhand for four days now with no respite from the blaze so far. As many as 46 forest fires have been wreaking havoc in the hill state following which the state has lost nearly 51.43 hectares of forest cover. Moreover, over half the wildlife species are in danger. Reports inform that the Kumaon region is the worst-hit area with 21 wildfires incidences so far. Northern and Central India has been reeling under severe heatwave making the matter worse. The rising mercury levels trigger the forest fires to spread due to which several acres of green cover has been gutted so far. #SaveTheHimalayas, #PrayForUttarakhand and #UttarakhandForestFires Trend on Twitter as Fire Rages in Uttarakhand.

Uttarakhand Is Burning From 4 Days, It Has Been Reported Uttarakhand Has Lost Nearly 51.43 Hectares Of Forest Cover, 46 Wildfires & Over Half The Wildlife Species are In Danger & The Worst Part No Media Channel Is Showing This!#UttarakhandForestFire pic.twitter.com/DwTU4Ck4VL

Heaven on Earth - #Uttarakhand is burning...

Our thoughts & prayers are with Uttarakhand. 2020 is turning out to be very scary.. #PrayForUttarakhand#UttarakhandForestFire #SavetheHimalayasReally pic.twitter.com/aiv4MGkSPI

Amid the deadly forest fires, panic also gripped people over the rising COVID-19 cases in the state. On Wednesday, 52 more people tested positive for COVID-19 in the state taking the total number of cases in the state to 401. A state Health Department bulletin on Wednesday said of the latest cases, 14 each were detected in Pithoragarh and Tehri, ten in Nainital, six in Haridwar, three each in Almora and Dehradun and two in Udham Singh Nagar district.

(The above story first appeared on LatestLY on May 27, 2020 01:54 PM IST. For more news and updates on politics, world, sports, entertainment and lifestyle, log on to our website latestly.com).