Devastating images and videos are being shared online to show the extent of forest fires in the region. But unfortunately, most of these photos and images are fake. These pictures are of previous forest fires from around the world and have been spread across as the ones from Uttarakhand. 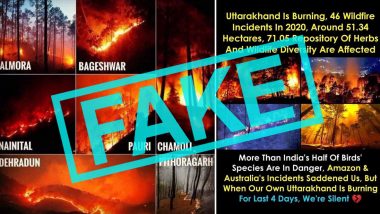 Amid all the news surrounding Coronavirus updates and the locust attacks in some states of the country, social media is also buzzing with Uttarakhand Forest Fire. Devastating images and videos are being shared online to show the extent of forest fires in the region. #SaveTheHimalayas and #PrayForUttarakhand are among the top trends on Twitter which have pictures of forest fires. But unfortunately, most of these photos and images are fake. These pictures are of previous forest fires from around the world and have been spread across as the ones from Uttarakhand. Officials have urged people to not blindly follow what they see and reassure that the situation is under control this time around. Uttarakhand Forest Fires Continue to Rage for 4th Consecutive Day, Kumaon Region Worst-Hit: Here Are 5 Latest Updates.

After the news of forest fires in Uttarakhand broke out, PIB Uttarakhand revealed a graph which shows that the number of fires has been considerably lesser this year. Forest fires are a common occurrence at this time of the year due to the rise in temperatures. However, the extent that we see on social media is exaggerated. Most pictures are from years ago, some could be from Australian bushfires too. As people draw comparisons to the fires in Amazon and Australia, the ones in Uttarakhand are far less.

Fake news of forest fire 2020 in Uttarakhand are being circulated on social media. After verification of such images it has been found that these images are fake. Few such images are being uploaded by us. It is our request to kindly do not spread fake news. pic.twitter.com/B9GBK8DgaL

I live in #Dehradun, #Uttarakhand. Plz don't overreact on reports of fires in our state. 51 hectares is 6 Lakh Sq Yards which is less than my residential colony. Comparisons with Amazon fires & Austrailan fires are far fetched. Amazon fire was 18000 times of 51 hectares. pic.twitter.com/KkVO5xdQKJ

Please go through the graph below, do not fall prey to misinformation. Forest fires have come down a lot this season. Partly due to less anthropogenic activity and partly due to rains. Go through this news item as well...https://t.co/ozCDqG2Lej pic.twitter.com/yjAp4K0lpe

Here's Another Satellite Map of The Fires:

Meanwhile, there are also reports of rainfall in some regions in the state, which will help in dousing these fires. The pictures that are being shared online are mostly fake and spreading more panic. We hope the above tweets help you to understand that the situation is under control. At the same time, the environmental damage of wildlife and flora, fauna is very much there. We would also like to urge our readers to not fall for the fake pics and videos, which will create more panic. So if you come across such posts on social media, please inform them about the same.

(The above story first appeared on LatestLY on May 27, 2020 04:18 PM IST. For more news and updates on politics, world, sports, entertainment and lifestyle, log on to our website latestly.com).