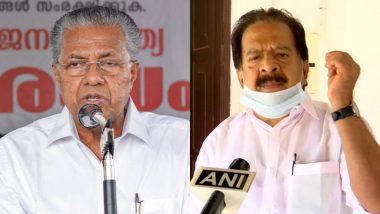 Addressing a press conference in at Cantonment House in Thiruvanathapuram, the Congress leader said, as quoted by news agency ANI, "I've written to PM, asking for CBI inquiry in the gold smuggling case. By misusing diplomatic channel, CMO helped culprits. Merely removing Secy won't solve the issue. CM also can't be spared as without his knowledge this could not have happened." Kerala Govt Removes M Sivasankar From CM Pinarayi Vijayan's Principal Secretary Post, Mir Mohammed to Replace Him.

In his letter to PM Modi, the Congress leader highlighted the misuse of diplomatic immunity of UAE Consulate in Thiruvananthapuram by international gold smuggling cartels. He alleged that gold smuggling was done with the collusion of officials working in the Chief Minister's Office.

Chennithala also attacked Chief Minister Pinarayi Vijayan. He said, "If the Chief Minister doesn’t have anything to hide on the gold smuggling case, then why is he shying away from ordering a CBI probe? I have written a letter to Prime Minister Modi seeking a CBI and Enforcement probe. LDF leaders including the CPM ministers, Speaker P. Sreeramakrishnan and AKG centre have close ties with Swapna Suresh. Only a CBI probe will bring out the actual truth behind the gold smuggling case."

It is to be known that CM Vijayan-led government removed M Sivasankar from the post of Principal Secretary, but he will continue as remain the IT Secretary.  The former public relations officer (PRO) of the UAE Consulate at Thiruvananthapuram -- Sarith Kumar -- has been accused in the smuggling of 30 kg of gold seized by the Customs department on July 4 and been remanded for 14 days in the case. He was arrested on Monday. Another name that is coming out in the gold smuggling racket is of Swapna Suresh, was also a former employee at the UAE Consulate.

(The above story first appeared on LatestLY on Jul 07, 2020 02:06 PM IST. For more news and updates on politics, world, sports, entertainment and lifestyle, log on to our website latestly.com).