The Embassy of the UAE in India condemned the Thiruvananthapuram gold smuggling incident and assured full cooperation with Indian customs authorities to thoroughly investigate the matter. Apart from this, the UAE Ambassador urged Indian authorities to take stringent legal action against those involved. 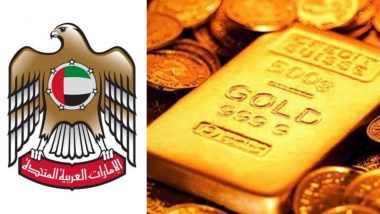 Embassy of the UAE in India and gold. | Representative Image (Photo Credit: Twitter/PTI)

Issuing an official statement, that UAE embassy said, as reported by Khaleej Times, "The Embassy of the UAE in India condemns the attempted misuse of diplomatic channels by an individual engaged in smuggling activity. The embassy firmly rejects such acts and unequivocally affirms that the mission and its diplomatic staff had no role in this matter." Kerala Gold Smuggling Case: Congress Leader Ramesh Chennithala Writes Letter to PM Narendra Modi, Seeks CBI Probe.

Apart from this, the UAE Embassy added, "Initial inquiries conducted by the mission revealed that a former locally hired employee of the UAE Consulate in Thiruvananthapuram was responsible for this act. The employee in question was fired for misconduct long preceding this incident."

The Embassy assured full cooperation. It said, "The UAE looks forward to fully cooperating with Indian customs authorities to thoroughly investigate this matter and urges stringent legal action against those involved."

Earlier, Kerala Congress leader Ramesh Chennithala on Tuesday wrote a letter to Prime Minister Narendra Modi and sought a CBI inquiry in the gold smuggling case. As per the case, the former public relations officer (PRO) of the UAE Consulate at Thiruvananthapuram -- Sarith Kumar -- has been accused in the smuggling of 30 kg of gold seized by the Customs department on July 4 and been remanded for 14 days. He was arrested on Monday.

(The above story first appeared on LatestLY on Jul 07, 2020 05:06 PM IST. For more news and updates on politics, world, sports, entertainment and lifestyle, log on to our website latestly.com).