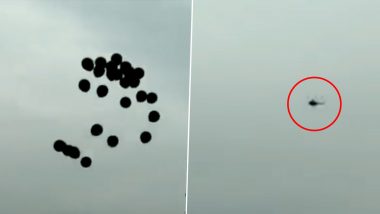 Some Congress leaders released the balloons as a mark of protest during Modi's brief visit to Andhra Pradesh over the Centre not granting special status to the state. Andhra Pradesh: PM Narendra Modi Gets Unusual Gift From CM YS Jagan Mohan Reddy

The balloons were released near the airport when the helicopter carrying the Prime Minister had taken off for Bhimavaram.

#WATCH | A Congress worker released black balloons moments after PM Modi's chopper took off, during his visit to Andhra Pradesh.

After landing of his special aircraft at Gannavaram airport, the Prime Minister left for Bhimavaram in West Godavari district by a helicopter to launch 125th birth anniversary celebrations of freedom fighter Alluri Sitarama Raju.

Governor Biswabhusan Harichandan and Chief Minister Y.S. Jagan Mohan Reddy, who were at the airport to receive Modi, also left for Bhimavaram by another helicopter.

Since the area around airport was declared a no-fly zone in view of the PM's visit, the release of balloons which came closer to the helicopters is being treated as a serious security lapse.

A case was registered against Rajiv Ratan, who is reported to be absconding. A police team was on the lookout for him. Meanwhile, police have arrested three Congress leaders for releasing the balloons.

State Congress leader Sunkara Padmasri was also detained by the police when she reached the airport raising slogans of 'Modi go back'.

Holding a placard and raising slogans, she tried to move towards passenger terminal but was stopped and whisked away by police.

She alleged that both Modi and Jagan Reddy betrayed Andhra Pradesh over the issue of special status.

After the incident, police further stepped up security around the airport when Modi returned from Bhimavaram.

(The above story first appeared on LatestLY on Jul 04, 2022 06:20 PM IST. For more news and updates on politics, world, sports, entertainment and lifestyle, log on to our website latestly.com).