Paying tribute to Lok Janshakti Party (LJP) founder late Ram Vilas Paswan on his birth anniversary, Prime Minister Narendra Modi on Monday said he was missing his friend's presence and remembered his contributions to public service in empowering the downtrodden. 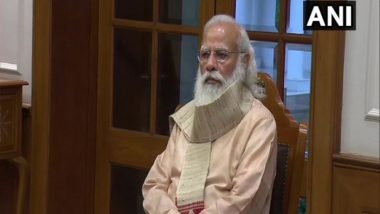 Paswan passed away on October 8 last year. He was one of the tallest Dalit leaders and held the record of winning his constituency, Hajipur, with the highest margin for several years.  Former CM Kalyan Singh Critical in ICU, PM Modi Calls Up His Son to Check on His Health

In a tweet, the Prime Minister said, "Today is the birth anniversary of my friend, Ram Vilas Paswan Ji. I miss his presence greatly. He was one of India's most experienced Parliamentarians and administrators. His contributions to public service and empowering the downtrodden will always be remembered."

Modi's affection for Paswan seen at a time when Chirag earlier expressed his disappointment with the BJP for not standing by his side when he had expected their intervention during the 'difficult' times. The LJP leader has said that he was 'hurt' at the BJP's silence while he battled his uncle Pashupati Kumar Paras to retain the control of the party.

The battle for Paswan's legacy is being played out as his son Chirag is involved in a tussle with uncle Pashupati Kumar Paras, who was elected as LJP's leader in the Lok Sabha by the five of party's six MPs.

Both the factions have now moved to control the party and project their group as the real LJP, founded by Paswan.

While the wing led by Chirag has expelled the five MPs from the party, the rival group has removed him as its president.

A meeting of the LJP national executive last Sunday endorsed Chirag's leadership and hit out at the faction headed by his paternal uncle for working against the party's constitution.

Chirag, meanwhile, took out 'Ashirwad Yatra' on the occasion of Paswan's birth anniversary to seek blessings of the people of Bihar. The yatra, in the form of a roadshow, started from Hajipur, represented by Paswan in the Lok Sabha eight times. Paras is currently the Lok Sabha MP from here.

(The above story first appeared on LatestLY on Jul 05, 2021 02:09 PM IST. For more news and updates on politics, world, sports, entertainment and lifestyle, log on to our website latestly.com).