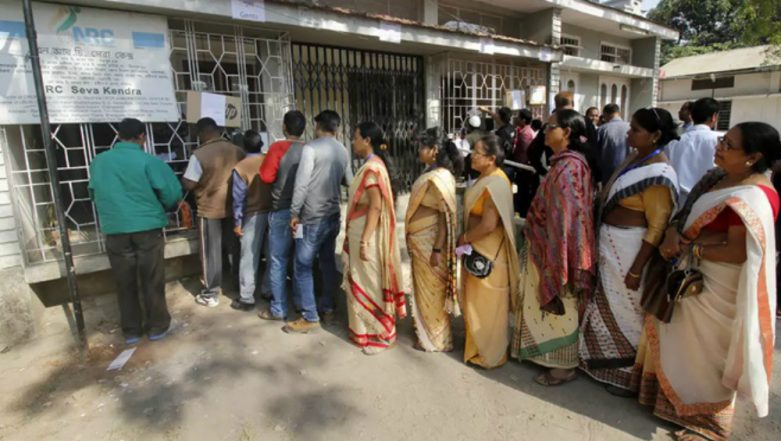 As the date of the final draft of the National Register of Citizens (NRC) draws closer, fear sweeps in among the citizens of Assam. June 30 has been kept as a deadline for the final list of NRC to be released but officials claim that the process may get delayed due to floods in Assam. A committee named Citizen Rights Protection Coordination Committee- Assam (CRPCCA) set by Topodhir Bhattacharya along with other members to battle against NRC in the state has been set up. The committee speculates that about 70 lakh of Assam’s three crore people could be dropped off from the NRC list in phases, out of which 25 lakhs are Bengali Hindus and the remaining are Muslims of the same community.

The first list which was released on December 31 last year did not contain 19 million names. In fact, many renowned politicians such as All India United Democratic Front (AIUDF) chief Badruddin Ajmal and his brother Sirajudding Ajmal could not find their name in the first draft of NRC.

How to check NRC status?

1. Visit the official websites nrcassam.nic.in, nrcdraft.in/NRCDraft, partdraftnrcassam.in, assam.mygov.in and assam.gov.in mentioned above and click on ‘Part Publication Of Draft NRC Is Now Active’. Enter your Application Reference Number (ARN) and answer the sum of number on the screen and submit.

2. Once the list is released, the individuals can also walk into your respective NRC Sewa Kendras (NSK) on all working days.

Bengalis are targeted in NRC exercise?

69-year-old Topodhir Bhattacharya reportedly broke down and explained the amount of pain he went through while debating about her nationality. The Hindu quoted him saying, “My father was a freedom fighter. I have always stayed and worked in Silchar and ended up as the Vice-Chancellor [V-C] of Assam University, a Central university, where the Vice-Chancellor is appointed by the President. But I’m not a citizen of this country.” He and his family did not feature in the first draft. He along with CRPCCA members estimated 70 lakh people are “likely” to be dropped off the NRC list and they calculated the figure on the basis of identity clarification sought from the various department under the central government.

NRC officials claims it to be misplaced fears

Prateek Hajela, State NRC Coordinator told The Hindu, “These are misplaced fears. We cannot quantify at this moment, but the number of people who might get left out would be 50,000 at most. Even then, they will get an opportunity to prove their citizenship through claims and objections.”

In the past month, Assam witnessed many protests over the proposed Citizenship (Amendment) Bill, 2016 that said the move would make Assam a “dumping ground for Hindu Bangladeshis”. BJP’s ally Asom Gana Parishad (AGP) termed it to be “Anti-Assam”. The Bill was introduced in the Lok Sabha on July 15, 2016 in which the government planned to change the definition of illegal migrants. It seeks “to amend the Citizenship Act, 1955 to provide citizenship to illegal migrants, from Afghanistan, Bangladesh and Pakistan, who are of Hindu, Sikh, Buddhist, Jain, Parsi or Christian extraction.”

Affects of National Register of Citizens of India

The National Register of Citizens (NRC) comprises the names of all the Indian citizens of Assam and it was prepared in 1951. NRC updation means the process of enlisting the names of those persons whose names appear in any of the Electoral Rolls up to 1971, 1951 NRC or any of the permissible documents stipulated. The demands to update the NRC of 1951 in Assam were first raised by the All Assam Students’ Union (AASU) and AGP. Both leaders of AASU-AAGSP and the government of India signed the Assam Accord in 1985 where they agreed that all foreigners who had entered in Assam between 1951 to 1961 would be provided with full citizenship. However, those who came after 1971 will be deported.

Assam, which had faced arrival from Bangladesh since the early 20th century, is the only state having an NRC, which was first prepared in 1951. Amidst to all the tension arising in the state, the citizens are requested to stay calm and coordinate in a positive note with the government. So far, the outcome can only be speculated and acting in a violent manner will not help anybody and we must strive together as the country needs peace.